We are starting an annual series where we rate the top NHL players by position.  We will keep the criteria simple.  For skaters that means looking at statistics such as points and time on ice.   We also gave players a Hockey Fan rating which denotes value to their respective teams (which is why you may see a player such as Connor McDavid higher up on the list of centers even though he has only played 12 games in the NHL).  From that analysis, The Hockey Fanatic has then compiled the top players by position for 2016.

Top 50 Centers based on Time on Ice

So lets begin the first part of our analysis based on time spent on ice.  This is a key indicator of how important these players can be to their respective teams.  Just because a given player at his respective position does not always put up the highest point totals, that does not mean that he should not be considered as the top player at his position.  Some players play against tougher competition on a given night so they still provide great value to their teams although they may not be putting up the points as some of their other counterparts at their position.  How many of you knew Ryan O’Reilly was leading the league center’s in ice-time? 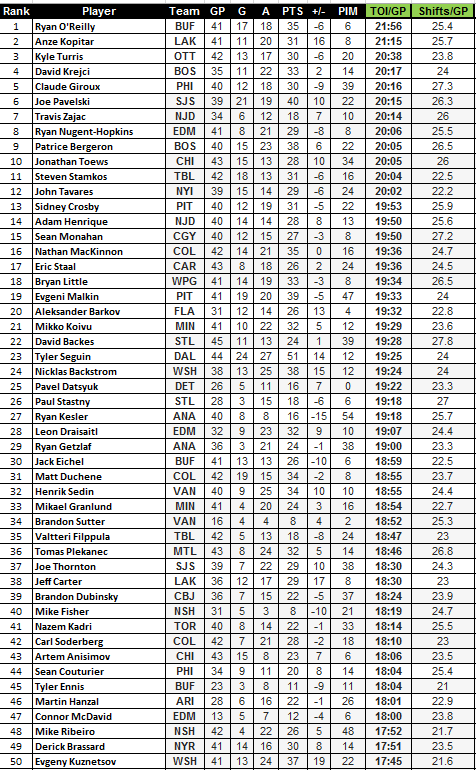 Interesting to see some of the centers in the top 10 based on time spent on the ice.  Look how high centermen such as Ottawa’s Kyle Turris and Edmonton’s Ryan Nugent-Hopkins spend on the ice, yet they’re not the highest producing point getters.   It just goes to show that coaches place value not solely on point production but on some of the other intangibles that players bring to the game.  Leading centerman in terms of points in Tyler Seguin from Dallas and he’s well down the list at twenty third will a still solid 19+ minutes per game.

Next we evaluated the stats.  As of January 10, 2016, here is a look at the top 50 point producers at the center position. 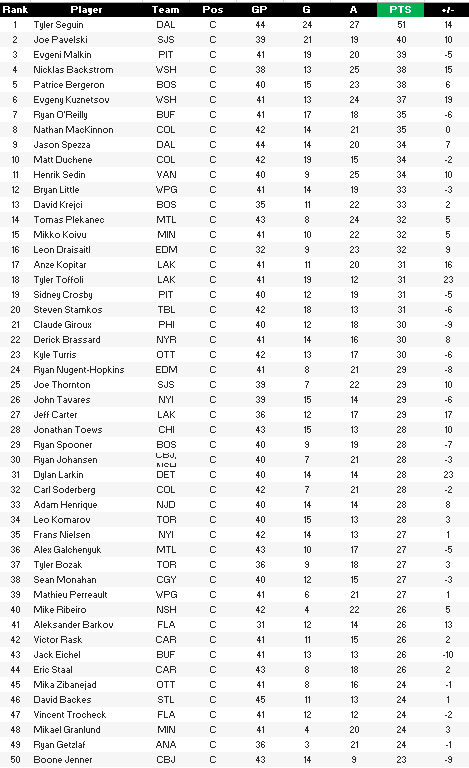 So after applying our Hockey Fan Weighting to the players, here is a look at your top 100 Centers in the NHL in 2016.  We have compiled a list of the top 100 centermen in the NHL today.

There you have it the Top 100 NHL centers in 2016.  Of course this list will change, however we will be compiling an annual comparison each January to see which players have improved and which players have dropped based on their performance by position.  Hockey poolies take note, for your fantasy pools for this season and next.