Ah its that time of year again, minor hockey across Canada and the Unites States will be kicking off within the next week or two.  Players young and old will be looking to get their skates buzzed up, ready to carve some ice.  As a hockey parent I’m often asked how often should you sharpen your skates. Being a hockey parent I also like to ask other hockey parents how often they sharpen their kids skates.  As a player I knew how often I needed my skates sharpened as I preferred them to be more sharp than not.  Some players actually might want them a little more dull. It’s totally up to the individual and what they feel suits them best. 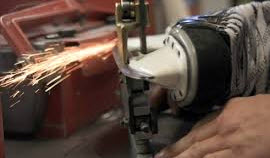 Why are sharp skates important?

If you think about the physics behind the act of skating, when the skate blade makes contact with the ice, friction causes the blade to melt the ice and the blade glides on the water that is generated.  Of course the water refreezes turning back to ice after the blade passes and the skater glides over the surface.  It stands to reason then that sharper skates melt the ice quicker making the ability to glide easier and more effective.  The benefits of sharper skates include:

A couple of useful definitions when it comes to skate sharpening.

Inside Edge:  The edge of the skate towards the inside of a skater’s foot

Outside Edge:  The edge of the skate towards the outside of a skater’s foot

Hollow: The cut or depression in a skate blade.

Radius: The shape the grinding wheel takes out of skate blade that is passed against it.

So just how often should you get your skates sharpened?  We’ve all heard various thoughts on this.  Some suggest that you should get your skates sharpened after 10-15 hours on the ice, others will say after 4-5 hours.  I know some parents that sharpen their kids’ skates once a month which probably translates to 25-30 hours if they play regular minor hockey.  It honestly depends how picky you or your child is with their skates.

How Often Should I Get my little hockey players skates sharpened?

Typically we would suggest to sharpen them as often or a little as you need to, but if you tend to be hard on your edges we would recommend a bit more frequency.  There is no magical sweet spot when it comes to sharpening your skates, but here are a couple of things to consider:

As a general guideline, The Hockey Fanatic suggests getting your skates sharpened after 10-12 hours on the ice.

So let’s discuss a bit more about radius size in terms of skate sharpening.

If you remember from your elementary school math class, the radius of a circle is half its width. When it comes to skate sharpening, radius refers to the shape the grinding wheel takes out of skate blade that is brushed against it.  Think of a circle with a small radius and how that can cut into the end of a rectangle.

When sharpening skates you will want to determine what radius size you need.  Most skates shops will recommend a 1/2″ radius which is pretty much standard for young skaters  Other common radius sizes include: This article discusses the effects of the Hollow and mentions:

For additional information on skate sharpening check out these resources: