The Origin of Hockey

It has been stated that the ancients played a game involving a stick and a ball which may have been a predecessor to the game of hockey we know today.  Field hockey had been played for years prior to the invent of ice hockey.   According to Wikipedia, the word hockey itself is of unknown origin, although it is likely a derivative of hoquet, a French word for a shepherd’s stav Modern day ice hockey is credited to the country of Canada.  A gentleman by the name of J G Creighton created the first set of ice hockey rules nearly 140 years ago.  His rules were implemented in the first game of ice hockey played in Montreal, Canada in the year 1875.  Mr. Creighton’s rules for the game of ice hockey were refined at McGill University in Montreal in 1879.

Originally there were no nets, just rocks that were used as “posts”.  There are reports that each side had as many as twenty five or thirty players on the ice at a time.   Ice hockey was first played in 1893 with European countries including the United Kingdom picking up the game less than a decade later.

Early hockey sticks were created of wood with a flat blade.  It wasn`t until the 1920s, when hockey players began to tape their sticks to increase the hold and strengthen the blade.  Curved sticks were not used until the late fifties; in fact reports suggest that it was the Golden Jet Bobby Hull who first used a curve stick.  As the story goes, Hull broke his stick in practice resulting in a curve in the blade.  Hull continued with the stick noticing that his shots appeared to have more accuracy and of course we all know about the velocity of his shots.

Today, the game of ice hockey is played all over North America, Europe and in many other countries around the world to varying extent. It is the most popular sport in Canada, Finland, Latvia, the Czech Republic, and in Slovakia. 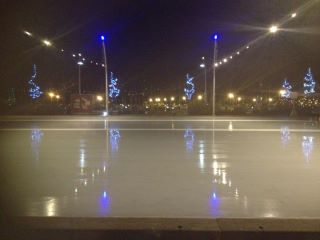 Hockey – a game played on an ice rink by two opposing teams of 6 players, 5 skaters and 1 goaltender, where the objective is to drive a puck into the opponent’s goal with a hockey stick.  This is referred to as scoring a goal.  The team with the most goals after the duration of play is the winner of the game.

Hockey is the greatest game on ice.  Thehockeyfanatic.com is dedicated to sharing great stories of the game from a fans’ perspective.  The game of hockey means different things to different people.  For me, hockey is more than a sport.  It is a form of exercise, it is a form of social engagement.  Hockey is about hand and eye coordination, it’s about the sound of your blades carving through the ice.  It is about shooting, passing, skating and puck handling.  It is about team and personal challenges.  Watching hockey can bring the best or worst out of us.  Being Canadian hockey truly is a way of life for many of us.  Across our country and across the world there are thousands of people who play hockey.  Some dream of playing for their country, some dream of hoisting the cup, some dream of lacing up skates for the first time.  Hockey is a game for all ages.