Welcome to the St. Louis Blues Stats page. The stats pages on thehockeyfanatic.com are meant to list what we as hockey fans associate with each particular team. Our stats pages will include our version of the all-time St. Louis team as well as obscure stats about the team. Notes stats are as of the start of the 2011-12 season (unless otherwise indicated).

Did You Know?  That in 1983, the St. Louis Blues nearly became the Saskatoon Blues as Purina who owned the team basically abandoned the team. They found a buyer in a group of investors led by WHA and Edmonton Oilers founder Bill Hunter, who then made plans to move the team to Saskatoon, Saskatchewan.  However, the NHL was unwilling to lose a market as large as St. Louis and vetoed the deal. The Blues did not pick anyone in the 1983 NHL Entry Draft because Purina did not send a representative. 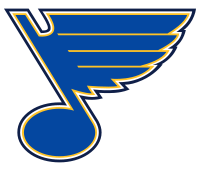