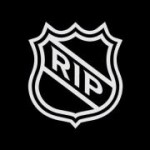 Day 61 of the NHL lockout is here and it looks like the season is all but lost. Quite frankly as much as we love hockey, we really feel that The League should simply cancel the season already.  I personally have my season tickets to the Western Hockey League’s Kelowna Rockets and will be taking in some action from the BCJHL with the West Kelowna Warriors, not to mention the upcoming World Juniors my personal favorite hockey tournament.  So you see NHL and NHLPA many hockey fans have filled their hockey fix.  For many the NHL is quickly becoming the true monopoly that it is.  Quite honestly it wouldn’t hurt for another start-up league to exist.  The WHA operated for a number of years in the seventies, we have the KHL over in Russia, so there is actually some competition for the NHL.  The league has become watered down in recent years, but there is still a lot of talent that could be used to form a rival league.  Perhaps then we would get teams in markets that would be able to support professional hockey such as Quebec, GTR, Seattle, Las Vegas, Portland and maybe even Saskatoon.  See our list of ten cities that need an NHL team.  Ah a hockey fan can dream can’t he?

As we move into another month without NHL hockey, the fans continue to voice their opinion.  One thing about a hockey fan is that they are passionate about the game of hockey… and hockey fans are for the most part very intelligent and informed about the game.

The longer the lockout goes the worse of it will be for the NHLPA, the players and Gary Bettman.  Frustration will continue to build just as apathy towards the NHL.  The League and the PA did this to fans six years ago,  Expect fan reaction to be a little different this time around, especially in the US where the NHL has been trying to build a following for years.  I guarantee that this latest lockout has caused the NHL to lose some fans forever.  Timing could not have been worse for this lockout to happen.  The world economy as is the US economy suffering and quite honestly hockey, at least NHL hockey was coming off record revenues.  Nothing like taking two steps back to lose an momentum that the NHL may have had.  Bettman has had a profound impact on the NHL game and the game of hockey. For better or worse, he has single-handedly disrupted a number of NHL seasons with work stoppages never before season in the history of professional sports.  Is that the legacy you want Gary?  Quite honestly whenever the new CBA gets signed it should be time for Gary Bettman to move on just as it should be time for Donald Fehr to move on.  Your egos are annoying at best.  The sport of hockey is not like baseball of basketball or car racing.  Maybe you have to be Canadian to understand exactly what hockey is?  Now the business of hockey, maybe you guys have a handle on that but from what we have seen we would argue that what you are doing is not in the best interest of the game, or of the league, the players or of the fans.  Think about it you guys are fighting over billions of dollars.  There is more than enough for all parties involved… including the hockey fan.

Until the two sides can work together and see the big picture and take the fans seriously any CBA will be tainted.  You think that we won’t be going through this again in another six or seven years? If the fans were the third party involved in these negotiations you can bet that there would be another of couple of issues added to the table:

Of course hockey fans should only be so lucky.  If someone from the NHL’s marketing department reads this, contact me I have some ideas as to what you can do to win some fans back.  The NHL could be the first professional sports league to actually offer fans some form of compensation for missed value.  Until then, the league will be hearing a lot from hockey fans.  Here are a few examples from this post from TSN: (posts remain unedited)

Time for another WHA to make the owners sit up and realize what’s possible.

Mr. Daly, hockey fans have been discouraged for weeks! NHL owners need to cancel the season and end the fan suffering ….period! I have been a season ticket holder in Edmonton for sometime, love the game and the players; however the rhetoric coming from the likes of players like Crosby is killing that feeling more everyday. So sick of the NHLPA comments that they are the only ones willing to negotiate…really….really! They speak to the fans like we are idiots…unbelievable! Love the game and miss it terribly but enough is enough….kill the season and start over making it affordable for fans!

Fehr has no interest in getting a deal done – his stone-walling strated a year ago. Cancel the season. I look forward to seeing the dumbfounded look on the players faces when they realize Fehr has cost them almost 2 billion in salary. Fehr is interested only in his own agenda, not serving his union membership’s best interests.

Fehr acknowledged that the union and league remained split on three major issues: the division of money, player contract rights and who pays for the damage caused by the lockout. …..that the owners would even suggest that the players pay for getting locked out only shows how arrogant they are!

Painful, very Painful how can players be so captivated by Fehr that the players are blind to the fact that gig is up. Fehr has pushed this as far as it is going go, have some humble pie, put you tail between your legs, the game is over. Bargain around the framework provided, sign it, put it behind you and enjoy the life style that so many can only dream of. Or loose an entire season, then sign the same or worse deal next year or the year after…

All polls i have read and just checking websites from all over it seems over 80% back the owners as do i.The players made a bad decision putting Fehr in charge and it is hurting them.

shut this down………..time to move on! PLEASE! Why are we giving them publicity ??

I am so done with this. Cancel the season, heck cancel next season for all I care. The NHLPA needs to be broken they are completely unreasonable and live in a world of fantasy. Now they want to be compensated for the money they are losing?? ARE YOU KIDDING ME??!!!

Keep fumbling it. I normally don’t take pleasure in seeing someone else fail but the NHL deserves it and it’s a small consolation to watch it all unfold.

Lock em out and give them the same CBA as NFL players. Perform or no money. If they don’t like it, show them the door and let the next guy in. Theres more than enough talent just dying to get into the NHL. Id rather watch a bunch of guys with heart than a bunch of over paid pre madona babies who dont think their silver platter life is good enough. The grass isn’t always greener NHLPA….good riddance.

If their role is to lead and improve the NHL and the NHLPA, both Bettman and Fehr, and their large teams of well paid negotiators and CBA experts, are clearly incompetent. I feel bad for all the other businesses who are suffering and for all the guys playing in Europe who will lose their jobs to NHL players looking for a paycheck. It is sad and ironic that, at a time when many regular folks struggle to make ends meet, extremely well paid players and wealthy owners can’t get their act together. They have lost perspective and it is disgraceful. NHL players who uproot guys in Europe are unethical. 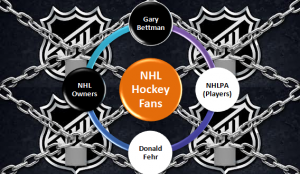 Hockey fans are enraged with what has transpired since September 15th, 2012, but what we are seeing is that the situation with fans may be more dire than what the league or players think.  Fans are not going to stand for the lockout his time around.  While yes some will be back, the damage has been done by both the NHL and NHLPA.  Time for a little soul searching all around, owners, players and fans.  Think about the Temmu Selannes, the Ryan Smyths, the Nail Yakupovs, the Martin Brodeurs and the players who play the game with passion and integrity and appreciate the fact that they earn more than the average “joe” for playing a game.