Chuck Berry would be proud.   The St. Louis Blues are finally Stanley Cup champions. In fact the St. Louis Blues went from worst in the NHL (as of January 4th) to first as they claimed the Stanley Cup.  This is a team that was almost dismantled mid season.  Their rise to Stanley Cup champions is like nothing ever witnessed by the NHL ever before.  A fifth string goalie comes in and plays incredible to get the Blues back in playoff contention and within two months the Blues are challenging for the Division and Conference leads.  Did I mention that they were last place in the entire league in early January?

This is a feel good story.  The Blues illustrate a team of hope, and hard work.  While their playoff run theme song might have been “Gloria” by Laura Branigan, it might as well have been “Don’t Stop Believin'” by Journey but in the end perhaps it should have been “You Can’t Catch Me” by the late Chuck Berry (a long-time St. Louis resident).

The Blues have had some great players over the years.  Bernie Federko played with the team from 1976 until 1989.  Brian Sutter another great Blues player.  Then of course there was Hull and Oates with Brett Hull and Adam Oates having a number of great seasons in St. Louis.  There was also Al MacInnis, Brendan Shanahan and Keith Tkachuk.  Other great Blues players included Chris Pronger, Curtis Joseph, and Pavol Demitra just to name a few.  There were also a few great ex-Oilers to play for the Blues including non other than Grant Fuhr and Wayne Gretzky.  The Blues seemed to always have decent teams – in fact the Blues enjoyed a playoff presence every year from 1980 to 2004 – the third longest streak in North American professional sports history.

History of the St. Louis Blues

By now, we’ve all learned about the history of the Blues.  They were one of the six expansion teams that came into the NHL in 1967.  Their first few years of existence saw them go to the Stanley Cup Finals only to get swept each time. Some of you may even remember when in 1983 “Wild Bill” Hunter attempting to purchase the team and move them to Saskatoon, Saskatchewan.  I remember this as a kid and was one of the many who hoped this would come to fruition, but alas the Blues were destined to stay in Missouri. The Blues have qualified for the playoffs in all but nine of their 52 seasons, appeared in the Stanley Cup Finals four times, but 2019 was the first time the Blues have been champions.

There is lots to love about the Blues.  While the officiating throughout the playoffs can (and will be) debated the St. Louis Blues, like most teams, had calls work against them and calls work for them.  They seemed like a team of destiny this spring.  Nothing was going to stop them.  If you believe in karma perhaps that worked in their favor as well.  As a hockey fan I love the personal stories that materialize along the way.  2019-19 has been an amazing journey for the St. Louis Blues organization and for their fans.  Here’s a look at some of the feel-good stories that have helped build the mystique of the 2019 Stanley Cup champion St. Louis Blues.

The Hockey Fanatic congratulates the St. Louis Blues on an amazing playoff run and as 2019 Stanley Cup Champions.  This is great for the NHL and great for hockey. 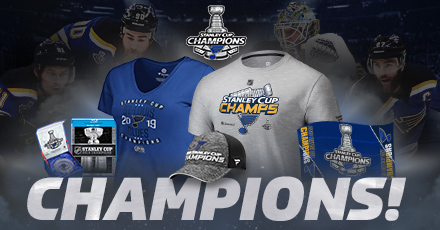