Wow can you believe that it is September already?  If you are a hockey family, you’ve no doubt been frequenting rinks already as minor hockey and tryouts are getting started.  I live in the Interior of British Columbia and it’s crazy to see how many kids have been on the ice already.  Some haven’t had a break from the ice all season.  Especially at the eight, nine and ten year old level, some of these kids have not left the ice.  Not sure if I agree with that approach as I am a believer that kids should be multi-activity and play multi-sport.

We are a hockey family and I am a huge fan of the game (hence the reason I created The Hockey Fanatic website), and being a hockey parent I see all sides of it.  In this day in age it can be a challenge being a parent in general, but being a hockey parent has presented some interesting experiences.

The thing is have you been to a minor hockey rink these days? Now I’m a competitive person by nature and I want my son to perform well and do well at hockey, but I’ve seen things from parents at rinks that just make me shake my head.  As early as five and six years old, I’ve experienced parents yelling at their kids and coaches from the stands. Now as a sport parent or hockey parent, I’m sure we are all guilty of a little of this and a little of that, but some of what I’ve seen just blows my mind.

Here is a little something for you hockey parents to consider.  A while back the ncaa.org released some information on odds of making pro sports.  Of course this is U.S. based but consider this:

It truly is a longshot as this article points out.  A study conducted in 2003 shows that the chances of going from minor hockey to a steady NHL career are roughly one in 4,000.  Cory McNabb, who at the time was director of hockey development for the Canadian Hockey Association suggests that: “Those who succeed must have natural talent…”Some just don’t have it. Parents shouldn’t pressure kids but rather encourage them. … In the school system we don’t teach multiplication before a child can add. These youngsters need to develop fundamentals.”  Point being is that your child is most likely not going to play a regular shift in the National Hockey League.

Even if you get drafted, the chances of playing regularly in the NHL can be slim. 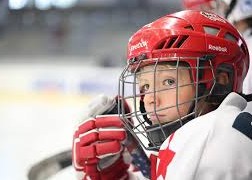 Why then do so many parents push their kids into hockey and in many cases think that their child will be the next or Connor McDavid?  Is it me, or are parents overstepping their boundaries at the hockey rinks across North America?

I’m a firm believer that hockey should be fun not matter at what age.  As a hockey parent I want to empower my son to enjoy the game of hockey.  We previously posted top 10 rules for being a great hockey parent and with that in mind, I try to follow these five golden rules for the hockey parent.

The 5 Golden Rules for Hockey Parents

To ensure that your child has an enjoyable experience with hockey consider the following five golden rules.  Looks some kids may have God-given talent, passion and a superb work ethic, but there’s no need to put extra pressure on your child to perform to a certain level.  Of course the level of competitiveness, the level of play and the rate of development will vary depending on age, but anytime your child steps on the ice there should be a smile on their face.

My son is a great little hockey player and he might have aspirations to play in the NHL one day, but he’s nine and a lot can change.  We encourage him in his play and development, but for us the main thing to to have fun with it, enjoy it and to always try his best.  He’s had some great success, but he’s also successful at school and other aspects of this life.  He also talks about being a financial planner or a chef or a pro baseball player. We will support him in wherever his passion lies.  He loves watching hockey and asks great questions about the game and not just about the players, but the refs and coaches as well.  He’s a very coachable player and is creative, but honestly we don’t see a need to have him on the ice 365 days a year.  We try to live by the five golden rules for hockey parents to ensure that he develops the necessary confidence and life skills not to be a great hockey player, but to be a great person.

I was speaking to him the other day about the upcoming hockey season and I mentioned to him about how much fun it is to watch him play hockey on the ice.  One of my favourite things about watching the kids in minor hockey is when they look up to the stands and smile at their parents or their grandparents.  You cannot put a price on that.

I wish other hockey parents would take a step back and let the kids play and just have fun.  Not even just hockey, but all sports.

How to raise the next Sidney Crosby – Today’s Parent

Canadian Roulette’: Why some parents devote everything for the ‘infinitesimal’ chance of getting their kid into the NHL – National Post

So You Want to Play Pro Hockey – Total Sports Management

How Many Draft Picks Make the NHL – Thoughtco.com

How Hard Is it To Make the NHL – Huffingtonpost

Book: Positive Pushing: How to Raise a Successful and Happy Child. – Jim Taylor