Over the years, I’ve had the pleasure of knowing a few friends that have gone on to play professional hockey, both in the NHL and overseas in Europe.  Like many Canadian kids, growing up, playing some hockey you always had a dream to make it to the show.  While not many kids will actually make it to the NHL, the ones that do rarely forget where they came from.

I recently had a chance to talk with an old friend from Grande Cache, Dean McAmmond who played nearly two decades in the NHL after retiring as a New Jersey Devil after the 2009-2010 NHL season. Dean currently resides in Vernon, BC with his family and is nearly a decade removed from the game.

Hockey Fanatic: Hey Dean, thanks for taking the time to meet with us.  You’ve been retired from the NHL for a few years now. What have you been up to and how are you enjoying life post-NHL?

Dean McAmmond:  Hey Jody, no worries.  Yes, I have been retired for 8 years now, time flys!

Retirement has not been the smoothest transition, Its hard to re-invent yourself and when the door closes on your physical hockey ability, so its like starting all over from the beginning for lots of us. I have the fortunate situation to be able to spend time with my wife and 4 kids, doing the driving, coaching, volunteering, some fixing and of course some playing! I like, to ride my Timbersled in the mountains, going dirt-biking, snowboarding and spend lots of time at the lake.

I am still trying to figure out what I am being called to do, what the next chapter is.

HF: You finished your NHL career with 996 games played. Any chance you come out of retirement to get those last four games in to hit the 1,000 game plateau?

DM: About 5 years ago I started to get in shape to do that, I ended up hurting my back and had to shut that down. I wish I had pursued 1000 games a little harder before I retired, but after 19 years, 7 trades, 12 teams, 10 different cities, I let it go. 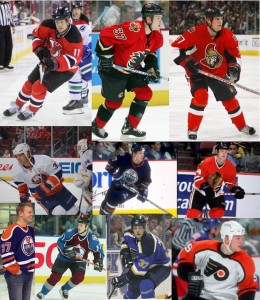 HF: The NHL recently completed the 2018 entry draft. Do you have a favourite memory from your draft in Buffalo in 1991?

DM: Yes, Chicago said they were going to pick me in the 1st round and when it came to their pick they called a time out and I thought they were changing their minds because of some other player being available, I was excited and relieved when they announced my name after all.

HF: 1991 was a pretty good draft year. You finished with more career NHL points than 11 of the players drafted ahead of you. Do you keep in touch with any of the guys from your draft class?

DM: Tyler Wright is still a friend and I see him from time to time. He is a busy guy, he is still involved with hockey. He is with Detroit’s organization.

HF: What’s harder being a professional hockey player or being a hockey parent?

HF: You coach minor hockey in Vernon. What’s the one skill that you would like to see kids work on?

DM: Skating with the puck and their head up as much as possible. Stick handling to the point where their hands feet and body are free to work independently while in motion and handling the puck. You need to focus on the process not the result.

HF: With all of the travel, trades and scheduling, how difficult is it being a professional hockey player with a young family?

DM: I was fortunate enough to have found a wife who is gifted with the ability to manage such a situation, so for me she made it easy on me.

HF: You are a man of faith. We all know how locker-room rants and on-ice discussions can go. How much of a role did your faith play in your day-to-day routine as a professional hockey player?

DM: There were conversations and situations that I didn’t agree with and would choose to distance myself from. My faith was something that helped me navigate life as well as the highs and lows of hockey.

HF: I wanted to get your thoughts on the topic of concussions and head injuries in the NHL. You suffered some injuries when you played. You had one of the all-time classic quotes on concussions:

DM: I think that the NHL is trying to address head shots in the hopes of eliminating head trauma and concussions. When Steve Downie targeted me he received a 20 game suspension, that was a message to state what this kind of action you will get (for those kind of hits) I believe.

Dean touches on the incident a little more in this interview from Sens TV from 2009.

HF: Do you think that the NHL will ever remove fighting from the game?

DM: I think fighting has lost its grip in the new NHL. The tough guy role is pretty much eliminated. I don’t think teams are intimidated anymore because the skill level and pace of the game as well as economics have eliminated the ability to do so. Fighting may be a game ejection as apposed to a 5 minute penalty in the near future is my guess, so that may be the beginning of the end.

HF: Do you think that the NHL is doing enough to eliminate head shots in the league?

DM: I can’t say what the NHL is currently doing because I don’t keep up with it.

HF: With the tragic event that happened in April with the Humboldt Broncos, how close to home did that hit you as you played junior up the road from Humboldt in Prince Albert?

DM: Prince Albert was long ago, but the Hockey world is small. My billet in Prince Albert knew one of the boys cause he stayed at her house. I played with Chris Joseph who’s son Jaxon died in the tragedy. For the families involved it is incomprehensible to me what they went through and still go through, my heart is heavy for all of them, even for the driver of the truck who also has a life of pain ahead.

HF: Well said, I think this accident touched everyone in the hockey world and that we will never forget this terrible tragedy.

DM: They are all great players, I love the fact that all the players are being asked to play a skilled game, I really enjoy watching the game today.

HF: Speaking of Connor McDavid, when you were drafted in 1991, you were touted as the fastest skater in the draft. In an on-ice race between Connor McDavid and Dean McAmmond in his prime, who wins?

DM: How much of a head start do I get?

HF: Favourite NHL rink to play in (and why?)

DM: Montreal Forum – Every time I played in the old rink, and the new one, it was more than a game, it seemed like an event of a tradition from generations past, and it is.

HF: That’s pretty cool.  Especially as you played in both the old and the new barns in Montreal.

DM: Toronto. They never win and still sell out! Lol!

Dean McAmmond scores on the Leafs

HF:Favorite player that you’ve ever played with?

DM:I really enjoyed being on a line with Craig Conroy and Jarome Iginla during my time in Calgary.

HF:  You guys had some good seasons there.  Tough to see Jarome retire recently.

HF: Toughest player to play against (and why?)

DM: Jaromir Jagr in his prime comes to mind. He would hang on to the puck, was so big, strong on the puck, skilled, and always a threat to score.

HF: I’ve always thought that.  He was such a great player and looked like it was difficult to move him off the puck.

DM: It was, he was so skilled.

HF: What’s the most memorable goal you ever scored?

DM: Its one I cant even remember! I scored the game winning goal against Anaheim in game 3 of the Stanley Cup finals when I was with the Ottawa Senators. I was knocked out by Chris Pronger the next period… it’s all a blur! Lol!

HF: What’s your most memorable game you played?

DM: No one game stands out over the next really. I have had great moments in bad games and bad moments in great games. After thousands of games I can recall events on the ice in Grande Cache that still feel as exciting as the rest if you can believe that!

HF: We both grew up in Grande Cache, Alberta. How often do you get back there?

DM: I get back to Grande Cache once in a while. Would like to get up there more but it is a bit of a drive from Vernon. Still have lots of family up there though!

HF: Thanks for taking the time to chat with us Dean. Anything that you would like to say to the Dean McAmmond fans out there?

DM: Thanks Jody, my pleasure. Just want to say “Hi mom!” LOL… It’s hard for me to think that are Dean McAmmond fans out there, but I appreciate them for cheering for me. Thank you!

HF:  Our pleasure, thanks again Dean!

Dean played 996 regular season games in the NHL amassing 448 points during his nearly twenty years in the game.  Drafted by the Chicago Blackhawks in 1991, Dean played a couple of stints in both Chicago and Calgary and had some great seasons in Edmonton and Ottawa.  He was traded… well a few times. Dean was also part of the Canada’s 1993 World Junior Team that captured gold in Gavle, Sweden.

Again big thanks to Dean for the interview.