My name is Jody Nimetz and I am the author, owner and creator of www.thehockeyfanatic.com. I am a hockey fan.  I am a hockey dad. I’ve played hockey, officiated hockey and watched hockey at all levels since I was five years old.

April, 6, 2018 will go down in Canadian and hockey history as one of the darkest days this nation has ever experienced.

The bus carrying 29 members of the Saskatchewan Junior Hockey League’s Humboldt Broncos collided with a transport truck on a rural highway in Saskatchewan at around 5 p.m. Friday when the tractor-trailer, traveling west on Highway 335, collided with the bus traveling north on Highway 35. The Broncos were scheduled to play the Nipawin Hawks in the fifth game of a best-of-seven SJHL semifinal playoff series.  The team was minutes from their destination. The end result of this horrific accident is that (at the time of this writing), fifteen people are dead and 14 are injured.

“This is a dark moment for our city, our community, our province,” Humboldt Mayor Rob Muench said Saturday afternoon at a news conference. “There is no playbook on what to do in cases like this.”

I first learned of the accident an hour or so after it happened on Friday evening as I was in my office when my wife asked what happened with the Broncos bus accident in Saskatchewan?  At first I thought she was referring to the Swift Current Broncos, when on December 30th, 1986, just outside of Swift Current, Saskatchewan, the Broncos team bus left for a game in Regina. A prairie winter meant icy road conditions and snowdrifts along the Trans-Canada highway. Barely out of town, the driver lost control of the bus and the bus skidded off the road coming to a crashing halt in the snowy ditch to the right of the highway.  One of my first posts on my then new Hockey Fanatics website was about the Swift Current Broncos tragedy 25 years later. Instead I quickly learned that the bus accident my wife was referring to had just happened and it involved the Humboldt Broncos.  My heart sank.  Selfishly my mind wandered to a thought of my own eight year old son who was supposed to be going on the bus early Saturday morning travelling with his AAA Spring hockey team from West Kelowna to Princeton.  He suffered an ankle injury at school a few days prior and would not be making the trip. Alas something more terrible had just occurred on a stretch of prairie highway that will now live in infamy.

At the time, not much was known about the severity of the accident involving the Humboldt team. Within hours that changed very quickly.  I awoke at 7 am on Saturday and headed off to the gym for a quick workout.  While riding the bike, I flipped on the TV and watched in dismay as the story unfolded about the carnage that occurred.  Upon seeing that the report which then stated that there were 14 fatalities and 15 injuries I instantly bowed my head and said a prayer for the families.  I unplugged my headphones from my phone and plugged them into the exercise bike so that I could hear more of the interview. Within minutes tears swelled my eyes and I grabbed a towel to wipe my face.  I felt instantly gutted.

Tom Straschnitzki the father of Bronco player Ryan Straschnitzki was being interviewed by CBC and had shared that his son appeared to have suffered a broken back in the bus crash and that he could not feel anything from the waist down. When asked what would be the first thing he will say to his son, Mr. Straschnitzki replied, “I will not say a word. I am going to hug him until he says to get off..”

To hear more from Tom Straschnitzki, download this CBC podcast.

Hockey Night In Canada’s Ron MacLean had some poignant words on the devastating tragedy.  Read more on this post from yesterday.  Some of which I will repeat here:

My first instinct was probably the same as yours.

I wanted to reach out, to hold the Humboldt Broncos tight, both the victims and their loved ones. I just wanted to sit in silence, to listen and to share. And to say the only three words that have ever mattered as much as life itself: I love you.

I sat staring at the one and only photograph of the accident scene, the shockingly blue sky and the carnage. Then I saw the team photo. I hoped that locks of their golden playoff hair could be kept. It would be nice if you could be certain of the hair, that beautiful, scented memory. If you could know that that was your young man.

When news broke about the accident in Humboldt, everyone headed for the rink. Canada itself is an endless arena. It houses our stores of energy and hope. That’s where we first went upon hearing the news and it is where we will gather to remember.

There is nothing stronger than our capacity for regeneration. I hope those locks of golden hair are preserved. With that hair one can feel the intimacy of a team and its extended family.

And it can allow you say to your man what I am saying to you now: I love you.

The past couple of days have been challenging for hockey fans all across Canada and the world.  This is just a devastating tragedy.  It seems like everybody has a connection to someone in this story.  I have been to Humboldt, Saskatchewan numerous times as my parents are from Saskatchewan.  A small farming town maybe three hours from Humboldt. The town of Humboldt, which has a population of around 6,000 people will never be the same after this fatal accident. Words cannot express the sadness, sorrow and pain I feel for the families, the first responders, the doctors, nurses, and especially members of the Humboldt Broncos hockey club. 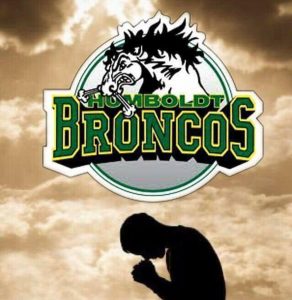 As my wife watched the news of this terrible strategy, my wife told me to turn it off.  She just could not handle hearing about the loss and all of the horrific details that were unfolding.  Out of respect for my wife, I turned off the television.  A few hours later we turned it back on and I fought back tears on numerous occasions as we learned more about the victims. Tributes began to pour in…

In times of despair there are often heroes that emerge and good people that come to light.  One such person is Sylvie Kellington who started a Go Fund Me fundraiser for families of those affected.  I donated right away.  As did each member of the Montreal Canadiens. What started with a modest target has been readjusted on multiple occasions due to the generosity and outpouring of donations.  As of Sunday afternoon on April 8, over 3.8 million dollars has been raised.  Please if you can spare, donate via Funds for Humboldt Broncos. 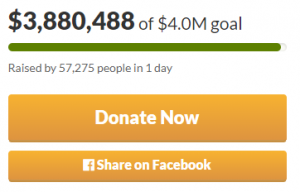 As a hockey fan and more so as a hockey parent, this tragedy has hit me hard.  I am at a loss for words.  To the parents and families of all of those affected, I just want to say I am so sorry and may God take care of you and your loved ones.

As expected the hockey world has been paying tribute in a variety of manners.  From Russia, Norway and Sweden and all across North America, tributes continue to roll in.  The hockey community is tight knit, united we stand #BroncosStrong.

Hockey Night in Canada had a fitting tribute to the Humboldt Broncos.

I’m at a loss for words.  May God Bless all of those people directly impacted by this terrible, terrible tragedy.