The newly awarded NHL franchise for Las Vegas has set to pick a name.  However it looks like the Las Vegas team will most likely become the Knights of some sort as the team has trademarked additional names including the Desert Knights, Golden Knights and Silver Knights, in addition to Nighthawks.  We still think that there are some better options as we outlined in a previous post about potential names for the Las Vegas team.  For the record one of our recommendations was the Las Vegas Ice Knights.  Here’s the story from NHL.com. 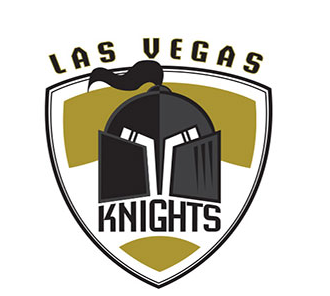 Las Vegas was awarded an expansion team on June 22. The franchise will begin play as the NHL’s 31st team in the 2017-18 season.

On July 13, owner Bill Foley said he wanted to have a logo and team name “ASAP,” but copyright reasons have been an issue.

He told Yahoo Sports last week exactly what he is looking for in a name.

“My goal is to have a name that I can create a culture around and people, the players and the fans will understand the connection and the names of the team and it has to stand for a lot of things that I strongly believe in, perseverance, dedication, honor, never give up, never give in. All these things I’m trying to put together with a name.”

“We want the name to fit our goals and what we’re trying to accomplish,” Foley said. “and I’m really confident that we’re going to hit it and do really well.”

Foley, a graduate of the U.S. Military Academy, said one of his first choices was Black Knights, the same nickname used at West Point, but it didn’t go over well with the fans.

“I do listen to what the fans are saying. Black Knights is not a popular name generally speaking amongst the fans,” Foley said. “I think they would have loved it because I had a real plan in place about what the Black Knight would be and how we would promote that logo and that name and that culture. But I believe we’ll do the same thing with the names we’re coming down to.”

Foley said Nighthawks, while not his preferred choice, is still on the table.

“That’s still a name – we have it reserved. It’s a name we could use. It’s not our preferred name. We have a couple of others that we’re working through that are a little bit different, but it’s kind of our backup plan. I guess you could say that.”