As a hockey fan I love Las Vegas and I love the sport of hockey so I would love to see a team in the desert.  A new arena is under construction on the Las Vegas strip and is set to open in the spring of 2016. Foley’s Hockey Vision Las Vegas ticket drive collected almost 14,000 deposits, which helped pave the way for the city to be a strong candidate.  So while we do not want to count our chickens before they hatch, we thought that we would have fun with some nickname candidates for the potential Las Vegas NHL franchise.

7 Potential Nicknames for an NHL Team in Las Vegas

Ok so this list features some obvious choices, but there are a number of great options for a sports franchise in Las Vegas.  Here are seven worth consideration: 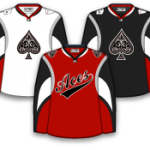 Regardless you can bet that the jerseys and uniforms will be pretty cool.