Well as most of you may know, December 18th marks the date for the new Star Wars movie entitled: Star Wars: The Force Awakens.  We thought that it would be fun to compare some of our favorite Star Wars characters with some of our favorite hockey players.  May the Force be With You as you go through this post.  Welcome to Hockey Wars 2015.

Ok so we are going to start off with the most obvious of choices and that is Brent Burns of the San Jose Sharks.

Brent Burns as the Mighty Chewbacca 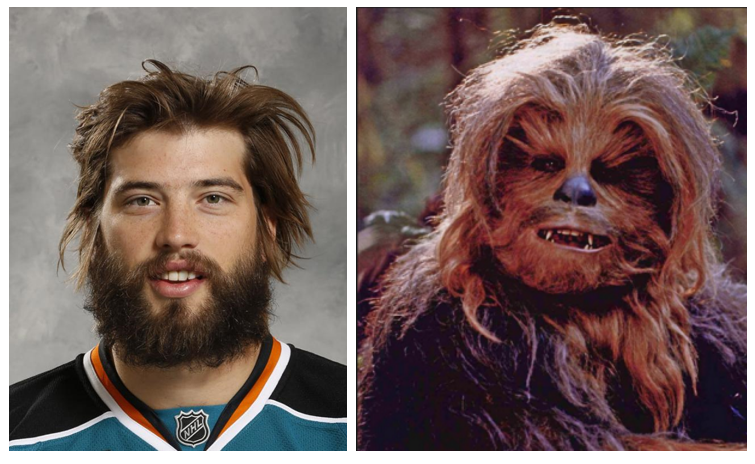 One of our favorite goalies and our favorite bounty hunter from the Star Wars series.  Boba Fett captures Han Solo while Luongo captures pucks for the Florida Panthers, 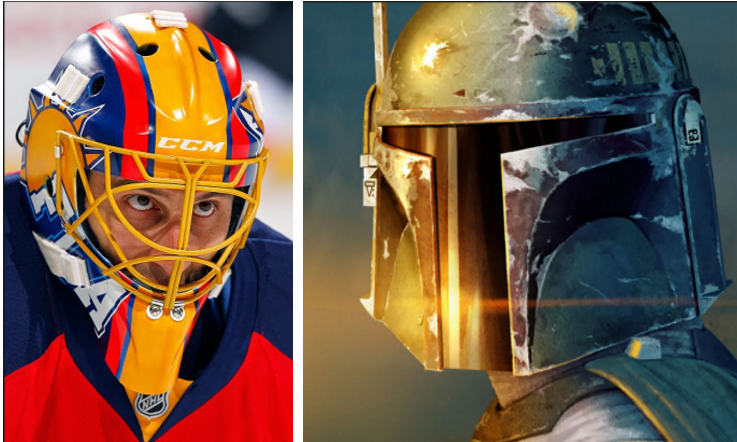 Carey Price leads the Montreal Canadiens against vicious opponents night after night on the ice just as Han Solo leads the Rebel Forces against Darth Vader and the Empire.

There is a lot of pressure on Connor McDavid to resurrect the Edmonton Oilers franchise just as there was on Luke Skywalker as one of the last great Jedi Knights.

Zdeno Chara is a monster to play against.  Even dirty at times, he makes it tough for the opponents of the Boston Bruins just as new villain in Star Wars the Force Awakens Kylo Ren.  Kylo Ren vows to get revenge on those who destroyed Darth Vader and rumors persist that Kylo Ren may in fact be Luke Skywalker in disguise.

We like our bounty hunters don’t we?  Kessel had a tough time with the media in Toronto but has been pretty quiet in Pittsburgh after many predicted he would score 40-50 goals this season playing with the likes of Crosby, Malkin and others.  Dengar was a nasty bounty hunter with a mean shot, just like Kessel.  We still look for big things to come from Phil and wish him all the best as he continues his career with the Penguins.

King Henrik is the long-time keeper of the Rangers net, saving goals and delivering wins.  R2-D2 is the trusty droid that always seems to be in the right place at the right time just like Henrik Lundqvist as he makes timely save after timely save.

Jamie Benn as a StormTrooper

Jamie Benn lead the NHL in points last season.  The former Kelowna Rocket is still an underrated player by many.  He just does not get the credit he deserves much like the Stormtroopers in Star Wars who do all the dirty work for Darth Vader and company and don’t seem to get the recognition they deserve either.

Tyler Seguin has proven to be a bona fide goal scorer in the NHL.  He was traded away from Boston after some reported off ice incidents that did not sit well with management.  Seguin may lack maturity and that could come back to haunt him, but he looks to be a leading point producer for many years to come and will serve the Dallas Stars well.  Greedo was a bounty hunter that worked for Jabba the Hutt.  Greedo was after Han Soloand found in him in the Cantina at Mos Eisley where Captain Solo blew Greedo away.  Not sure who will be able to knock off Seguin as he continues to be a top performer in the NHL. 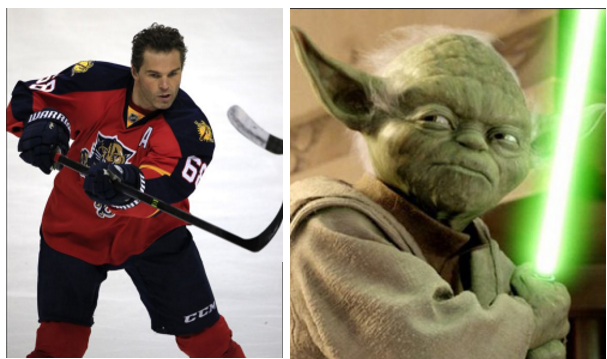 We actually like Raffi Torres but the guy is like a bull in a China-shop taking runs at players throughout the league.  As a repeat offender, Torres has again been suspended for a long duration.  You have to think that his time with the “dark-side” is limited.  He has become the poster boy the the NHL’s bad guys, just as Darth Vader became one of the greatest villains of all time.

There you have it NHL players depicted as some of our favorite Star Wars characters.  The NHL can be seen nightly throughout October through June and Star Wars: The Force Awakens will be out on December 18th, 2015.