Since going to the Stanley Cup Finals and losing in game seven to the Carolina Hurricanes in 2006, the Edmonton Oilers have struggled as a franchise.  They have not made the playoffs since and have finished near the bottom of the standings too many times to mention.  What is the cause for this?  The Oilers had some high draft picks and were able to draft some good young talent, but that has not translated to wins on the ice.  Without placing the blame on a single individual, you have to think that the mess the Oilers are in is a direct result of poor management.  From Kevin Lowe, Steve Tambellini, Craig McTavish and now Peter Chiarelli to poor coaching selections of Dallas Eakins and others the Oilers management team(s) have failed the players and failed the fans.

The latest frustration occurred yesterday when Perter Chiarelli traded arguably one of the top four left wingers in the NHL today in Taylor Hall to New Jersey for underachieving defenceman Adam Larsson.  Fans and hockey writers throughout North America were stunned with the news of this trade.  Seriously this is all you could get for Taylor Hall?  Some are saying that this is one of the worst trades in NHL history.

#10. Oilers trade toughness for a little less toughness – on May 30, 1991, the Oilers traded arguably one of the best tough guys in the league at the time in Dave Brown as well as Corey Foster and the rights to Jari Kurri to the Philadelphia Flyers for Craig Berube, Craig Fisher and Scott Mellanby.

#9. Oilers trade away a leading faceoff man – In June 2008, Oilers traded Matt Greene and Jarret Stoll in exchange for Lubomir Visnovsky.  Not a super terrible trade but after Stoll left the Oilers would be terrible in the faceoff circle for years.

#8.  Oilers get slower on the blueline – in March of 2010, the Oilers traded Lubomir Visnovsky to the Ducks for Ryan Whitney and a 6th round pick in the 2010 draft which turned out to be Brandon Davidson.  Whitney was terrible for the Oilers and the verdict is still out on Davidson.

#7. Oilers trade Doug Weight to St. Louis – in June 2001, the Oilers traded Doug Weight and Michel Riesen to the St. Louis Blues for Jochen Hecht, Jan Horacek and Marty Reasoner.  As Weight was the best player (by far) in the trade the Oilers lost this one, although Hecht and Reaoner did play for the Oilers for a stretch.

#6. Oilers trade Paul Coffey to the Penguins – the Oilers Acquired: Craig Simpson, Dave Hannan, Chris Joseph and Moe Mantha from Pittsburgh in exchange for Paul Coffey, Dave Hunter and Wayne Van Dorp.  In November of 1987, the Oilers were in a financial dispute with allstar defenseman Paul Coffey, who had recently helped Edmonton to their third Stanley Cup title. As a result of the contract dispute, Coffey was traded to the Pittsburgh Penguins by Glen Sather. Coffey went on to help lead the Pens to a Stanley Cup in 1991, and produced two more seasons of 100 plus points.  While Craig Simpson was a great player for the Oilers, Paul Coffey was still one of the greatest offensive defensemen of all-time.  One of the first Boys on the Bus to be traded away from Edmonton.

#5.  Oilers trade Chris Pronger to the Anaheim Ducks – almost ten years ago to the day on July 2, 2006, the Oilers were just days out of losing game seven of the 2016 Stanley Cup to the Carolina Hurricanes.  After only one year into a five year deal with the Oilers, Chris Pronger requested a trade from the team.  This after Pronger had a great season and even better playoff with the Oilers.  Rumors swirled that Chris Pronger’s wife had something to say about the trade.  Regardless of how the trade was instigated, the Oilers have not seen the playoffs since.  The trade itself consisted of the following:  Chris Pronger from the Oilers to the Ducks for Joffrey Lupul, Ladislav Smid, 2007 1st round pick (#30-Nick Ross), 2008 2nd round pick (#53-Travis Hamonic), and 2008 conditional 1st round pick (if Ducks reach 2006-07 finals) (#22-Jordan Eberle).

#4. Oilers trade Mark Messier to the Big Apple – Mark Messier was always my favorite player growing up, so although I knew this trade was coming it was disappointing nonetheless.  After a failed negotiation, Messier requested a trade out of Edmonton.  On October 4, 1991, Edmonton sent Messier and future considerations (Jeff Beukeboom) to the New York Ramgers for Louie DeBrusk, Bernie Nicholls, Steven Rice and future considerations (David Shaw).   Messier would go on to break a 40 year old slump helping the Rangers win their first Stanley Cup since 1954.

#3.  Oilers trade Ryan Smyth to the Islanders in a draft day buzzer beater – Ryan Smyth loved playing for the Oilers and as the 2007 NHL Trade Deadline approached, the Oilers and Ryan Smyth had failed to come to an agreement on a contract which would extend Smyth’s time in Edmonton. Some were reporting that Smyth had signed a long-term contract with the Oilers only to have breaking news as the draft deadline expired.  Having spent the first 12 years of his career with the Oilers, Smyth was extremely upset when he was traded by his much beloved Oilers to the New York Islanders, who were preparing for a playoff push.  In return for Captain Canada, the Oilers received Ryan O’Marra, Robert Nilsson and Alex Plante.  Three terrible players who ended up playing very little in the NHL. 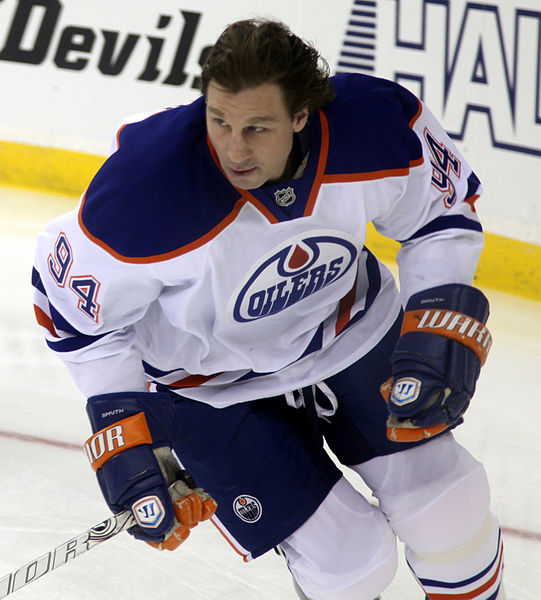 #2. Oilers trade Taylor Hall to the New Jersey Devils for Adam Larsson – at the time of this writing, this trade is only days old. A straight up one for one trade.  Hall is most likely one of the top three or four left wingers in the game while Larsson is an underachieving defenseman.  Yes the Oilers need defense, but this is such a lopsided trade that many hockey writers in North America simply could not believe it.  As the Edmonton Journal stated, “Peter Chiarelli may be the only general manager in history to have traded the first and second overall picks in the same draft year — first time with the No. 2 selection Tyler Seguin in Boston, and now the No. 1 Taylor Hall with the Edmonton Oilers.”  As an Oilers fan this trade does not make the Oilers a better team, it makes them worse… which is difficult to swallow after 10 straight years out of the playoffs.  If the Oilers win the Stanley Cup this year, I will still feel that this is one of the all-time worst trades in NHL history.  Prove me wrong Larsson, prove me wrong.

#1.  Oilers do the unimaginable and trade Wayne Gretzky – where were you on August 9, 1988?  Then owner of the Edmonton Oilers, Peter Pocklington did the unthinkable.  Poklington and Bruce McNall completed the trade that sent Gretzky to the Los Angeles Kings along with Mike Krushelnyski and Marty McSorley in exchange for Jimmy Carson, Martin Gelinas, three first round draft picks, and $15 million.  Paul Coffey saif that Gretzky was traded like a piece of meat.  Glen Sather is still pissed about this trade.  Peter Puck and Bruce McNall were undoubtedly aware that the trade would have a considerable impact on the history of the NHL and would certainly leave a bitter taste in the Canadian hockey fan’s mouth, especially Oilers fans.  After the trade fans in any sport always say that if Wayne Gretzky can be traded than anybody can be traded.  As an Oilers fan there were some tears had on this day. There you have it the ten worst trades in Edmonton Oilers history.  Yes the Taylor Hall trade is still fresh but it has to be considered one of the worst trades ever.  You have to think that GM Peter Chiarelli could have gotten a better return.  For more Oilers trades check out nhltradetracker.com.