The NHL awards are slated to take place in Las Vegas this Wednesday, June 22, 2016.  One of the interesting debates with hockey fans is who should win the Calder Memorial Trophy as rookie of the year.  The three finalists for the award are:

Connor McDavid, 19, was fourth among rookies with 48 points despite playing 45 games because of injury; he missed three months with a fractured left clavicle sustained Nov. 3. His 1.07 points-per-game average was third among all players to skate in at least 40 games behind only Patrick Kane and Jamie Benn. The first pick of the 2015 NHL Draft, McDavid, had 12 multipoint games, including a five-point game (two goals, three assists) Feb. 11 against the Toronto Maple Leafs. At age 19 years, 29 days at the time of the game, he was the ninth-youngest player ever with a five-point game.  He was named rookie of the month in the three full months that he played.

No Oilers player has won the Calder; he’s their first finalist since center Ryan Nugent-Hopkins in 2012. 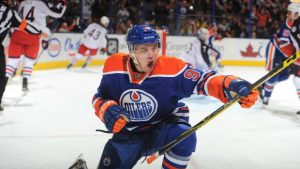 Members of the Professional Hockey Writers Association voted on the award, which will be presented during the 2016 NHL Awards at the Hard Rock Hotel & Casino in Las Vegas on June 22.

7 Reasons Why Connor McDavid Should Win the Calder Trophy

Here are seven reasons as to why Connor McDavid should win the Calder Trophy as the NHL’s rookie of the year for 2016.

No Flyers player has won the Calder; he’s their first finalist since forward Mikael Renberg in 1994.

Artemi Panarin, 24, signed with the Blackhawks on May 1, 2015 after seven seasons in Russia, and led rookies and was tied for ninth in the League with 77 points. He also led rookies in goals (30), assists (47), power-play points (24) and game-winning goals (seven). He became the fourth Blackhawks rookie with 30 goals and first since Eric Daze in 1995-96. He also had a hat trick Feb. 17 against the New York Rangers, the first Blackhawks rookie with one since Tyler Arnason during the 2002-03 season.

He is looking to become the Blackhawks’ first Calder Trophy winner since Patrick Kane in 2008.