Gordie Howe:  The Best Ever

Last week was rough for sports fans around the world.  Not only did we lose the Great Muhammad Ali, but we lost Mr. Hockey Gordie Howe who passed at age 88 last Friday (June 10, 2016).  I had previously posted about my one and only meeting with Mr. Howe and how that was one of my most favorite hockey moments ever.

In recent years there have been a lot of famous folks that have come to pass.  In my personal life I have lost two uncles who meant a lot to me.  Life is not the same without them.  I think about them everyday and although they say time heals all wounds I seem to miss them more and more each day.  When I found out that Gordie Howe had died, I felt shaken to the core.  We were on a school bus heading out for an all-day field trip with my son’s grade one class.  It was Friday morning and a dad of a friend of my son mentioned that we lost Gordie Howe today.  I was a little in shock.  I knew that he had been in poor health, but Mr. Hockey was a fighter so I was devastated to hear this news.  Quote honestly I was saddened.  And today is Monday and I am still saddened by the news that Mr. Hockey is no more.

The tributes have been amazing.  One of the favorite things that I have seen is a post on Facebook from my friend Grant.  Now I haven’t seen Grant for over twenty years but through the technology of Facebook we reconnected a few years back.  (I hope that Grant doesn’t mind me sharing this).  We are both a proud fathers of our sons.  Grant’s son is named Tucker and I believe that a few years ago when he was getting his first hockey jersey he requested a red Detroit Redwings “Howe” jersey.  Here is an amazing picture of Grant and Tucker.  This what hockey is all about folks.  This is the impact that Mr.  Hockey, Gordie Howe has had on generations of hockey fans.

How cool is that?

My favorite player growing up was Mark Messier of the Edmonton Oilers.  I liked the way he played and I especially liked how he made room for himself on the ice.  I liked him because to me, Mark Messier was the modern-day Gordie Howe.  He could skate, score, set up plays and he could make room for himself and his teammates with a little physical play, a cross check here, an elbow over there and when necessary a fight.  So indirectly you might say that Gordie Howe was always my favorite player.  In fact in one of our previous posts on the top 100 players of all-time, we listed Gordie Howe as the #2 player behind only Wayne Gretzky.  The fact is that Gordie Howe is the best overall player of any era anytime.  Oh what I wouldn’t do to have a red Detroit Red Wings #9 jersey like you Tucker.

I am truly saddened at the passing of Gordie Howe. 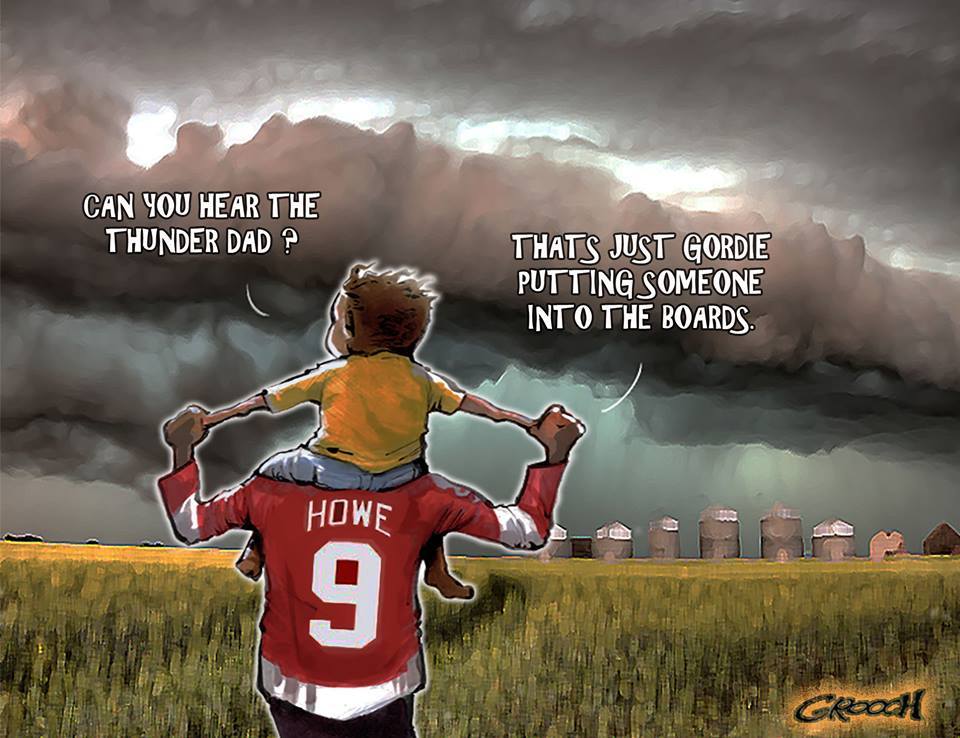 There are so many amazing facts about Mr. Hockey that we could share.  Here are nine cool facts about Gordie Howe that hockey fans might appreciate.

There was a tribute in the Saskatchewan legislature Monday for the man known as Mr. Hockey.

Government house leader Ken Cheveldayoff told the assembly that Gordie Howe was known as a humble man, but when the puck dropped, he was a fierce competitor.

Cheveldayoff joked that hockey fans everywhere know what a Gordie Howe hat trick is — a goal, an assist and a fight in the same game.

Cheveldayoff also noted that Howe always made a point to talk to fans and sign autographs.

Howe, who was raised in Saskatoon, died Friday at the age of 88.

Flags in Saskatoon and at the Saskatchewan legislature were lowered to half-mast in his honour and will stay that way until his funeral in Detroit on Wednesday.

In June 2010, Mr. Hockey became Mr. Hockey when he received an honorary law degree from the University of Saskatchewan in Saskatoon.

We love you Gordie Howe.  Mr. Hockey if you are looking down on all of us hockey fans, thank you from the bottom of our hearts for being the greatest hockey player ever and for being one of the greatest human beings ever. #ElbowsUp

One thought on “Gordie Howe: The Greatest All-Around Hockey Player Ever”