This is the first instalment of a new feature here on the Hockey Fanatic site called “Hockey Stories”.  Really these are just random stories from my younger days growing up a hockey fan in Western Canada.  For those who know me, I am a life long fan of the Edmonton Oilers and I grew up watching the glory years of the Oilers in the 80’s.  We would love to hear from you as well.  If you have a great hockey story to share drop us a line on Twitter @hockeyfanatics and maybe we’ll share your story or favorite hockey memory on our site.

Only one man has played professional hockey in six different decades.  One of the greatest, meanest hockey players to ever play the game was a man from Floral, Saskatchewan named Gordon Howe.  Ask anyone who was the greatest player of all-time and they will most likely name one of three players, Wayne Gretzky, Bobby Orr or Gordie Howe.

Here is a quick story about how I got to meet Gordie Howe, Mr. Hockey himself.  Gordie Howe was a beast on the ice.  He could do it all and often when he needed to he took matters into his own hands.  Off of the ice I always thought that Mr. Howe was a soft spoken gentleman.  When I was a kid, the WHA was folding and four of its teams were joining the NHL.  The Winnipeg Jets, Edmonton Oilers, Quebec Nordiques and the New England nee Hartford Whalers.  It was on the Whalers that a 50 year old Gordie Howe would play with two of his sons Mark and Marty and play a full 80 games posting 15 goals and 26 assists in his final NHL season.  Again he was 51 years old at the time.  I cannot think of another athlete to play at this level and still be this effective at 51 years of age.  Most impressive and just one of the reasons why Gordie Howe is one of the greatest athletes of all time.

So the story of how I got to meet Gordie Howe may not be anything special to you but it sure was to me.  It was in the early 90`s I had moved to Kelowna, BC to study Business at Okanagan University College.  I had grown up in small town Alberta so moving to the bigger city of Kelowna was quite an adjustment.  I found it difficult to meet people at first but my love for the game of hockey allowed me to finally meet some great friends in the Okanagan.  This was also right around the time when collecting hockey cards became a viable business and as a child I had a pretty decent collection (and still do) of hockey cards.  So when it was announced that a hockey card show was coming to town and that Mr. Hockey himself was going to be in attendance, along with his son Marty, I knew that I had to attend.

As I recall the hockey card show was in a venue called The Boardwalk an old roller skating rink that sometimes held music concerts.  It was on a Sunday I believe and I headed over to the show myself.  In the days leading up I was going through my card collection to find the best Marty Howe and Gordie Howe hockey cards that I could to get autographed.  The cards that I ended up selecting were a 1983 O-Pee-Chee card of Marty Howe and of all of the cards a 1991 ProSet black and white `Mr. Hockey`Gordie Howe card.  I selected that card to get signed for a couple of reasons: one I had a number of doubles of that particular card and two I liked the classic pose of a young Gordie Howe in his Red Wings uniform. 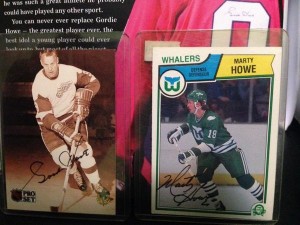 So when it was time to finally get in line to meet the legendary hockey giant I made sure that I was near the front of the line.  I was probably within the first twenty people to get in line, so as I approached the able I thought to myself that this was hockey royalty, I am actually going to meet arguably the greatest hockey player of all time Gordie Howe.  Marty politely said hello and I said `hi`back and he very neatly signed the bottom left of the Hartford Whalers card that I presented to him.  I thanked him and he gave me a wink.  Then I moved ever so slightly to my left where Mr. Hockey, Gordie Howe was sitting down.  I said “Hello Mr. Howe, great to see you.  Would you mind if I shook your hand?”  With that, the then sixty two year old stood up reached out his hand and gently shook my extended hand.  I remember thinking that these were the largest hands on a human being that I had ever seen.  I recall reading stories that as a teenager back in Saskatchewan Gordie used to squeeze rubber balls so hard that he would crush them.  I believe it after seeing the size of his paws.  Then with a firm but gentle handshake the Gordie Howe shook my hand.  (It reminded me of how my grandfather used to shake hands with me.)  He then gave me a smile and in his soft spoken voice asked me what my name was and said thanks for coming.  I muttered something to the effect that it was my pleasure and politely thanked him for taking the time to sign my card.  You can see how neatly he signed the card obviously from decades of practice.  Now he must have signed a million autographs in his day but for me this was one of the greatest pieces of hockey memorabilia that I could ever have.  I thought about how I read about the first time Mr. Howe met Wayne Gretzky and the famous picture where Gordie holds a stick up to Wayne’s ear.  I thought about how my parents were from Saskatchewan and that I always had close ties to Saskatchewan and that it was cool that Mr. Howe was from Saskatchewan. 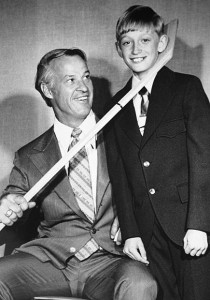 The meeting lasted all of 30-40 seconds but it was something that I would remember fondly.

So earlier this week when it was announced that Mr. Howe had suffered a pretty severe stroke, I remembered my meeting with him.  I remember being so impressed with him.  I thought about how ironic it was that he made more money from endorsements after hockey than in the five or six decades when he played.  I thought that today’s players owe a lot to Gordie Howe and that I hoped he would be remembered as one of the greatest hockey players and greatest athletes of all time.  I purchased his new book Mr. Hockey last week.  I cannot wait to read it.

You can purchase the book at Chapters Indigo here or at Amazon here.

“He played the game differently from any other player.Physical yet very elegant, smooth yet with an edge.  Fans came to see him play all over North America, filling arenas every night, and very rarely did he disappoint anyone.  He made the game bigger and better… You can never replace Gordie Howe – the greatest player ever…”  You can’t argue with that.  And for the record there is nothing cooler in my mind than getting a Gordie Howe Hat-Trick in hockey.  How many other players have actions named after them in hockey?  Not very many.

Mr. Howe, not sure if you will get to see this, but I wish you a speedy recovery and want to thank you for being a great ambassador for the great game of hockey.  As always, elbows and head up Sir.