Connor McDavid – #97 for the Edmonton Oilers

On Saturday afternoon I turned on the TV to watch some NHL Playoff hockey forgetting that the NHL was conducting their Lottery Draft on this day.  I was like cool; this year’s draft is slated to be one of the best in recent memory so I wanted to check it out.  Prior to the lottery draft starting I mentioned to my wife about all of the hype around Connor McDavid and that he would most likely be going to either the Buffalo Sabres or Arizona Coyotes.  I happen to be a lifelong fan of the Edmonton Oilers (and it has been a difficult past decade to say the least).  I told my wife that I would cry if the Oilers won the draft lottery.  So then NHL Deputy Commissioner Bill Daly came on and they start the draft process… “Boston retains the 14th overall selection; Los Angeles will retain their 13th selection in the NHL draft…”  The entire process played out as expected as Mr. Daly announced that the Carolina Hurricanes would retain their fifth overall selection.  Then something inside me went, “the Oilers are going to do it, they are going to get the first overall pick”.  The next few seconds seemed like an out of body experience, when Bill Daly announced that that the Edmonton Oilers have been awarded the first overall pick in this June’s draft I was like “holy F**k, they did it, they actually did it.”  I can honestly say that I was totally shocked.  Unbelievable.  I could not believe it.  I was shocked, angry, excited, dumbfounded and relieved all at the same time.  Shocked just because this was entirely unexpected, angry because as a long-time Oiler fan to see how management has run this team into the ground and to be rewarded a “generational hockey talent” and another number one pick just didn’t seem right, excited because this is a highly touted, perhaps once in a lifetime pick that we are talking about, dumbfounded as to how the NHL could let this happen and relieved because a part of me felt that teams that purposely tanked (see Buffalo and Arizona) did not get rewarded for throwing the towel in.  Of course once it was announced that the Oilers had won the first overall pick a social media firestorm started.

FACT #1: The Edmonton Oilers won the NHL draft lottery on Saturday, giving them the opportunity to pick OHL phenom Connor McDavid in June.  This marks the fourth time in six years that the also-ran Oilers will receive the top pick in the NHL Entry Draft.

FACT #2: Hockey fans can be a fickle bunch.  If you go any hockey message board you will see hockey debating who is the better team, who is the better player and which trades they would make if they were the General Manager of their favorite teams.  While you see a lot of debate, you can also see a lot of ignorance.  As Taylor Swift said, “the haters are going to hate, hate, hate.”  Some of the commentary that I was hearing or reading was quite brutal to be honest.  People are talking about conspiracy theories and about how the draft lottery needs to be changed (and you get bet that they will change it again).  Noted hockey blogger Greg Wyshynski (aka Puck Daddy) over at Yahoo Sports had some unimpressive things to say about the event:

Or how about this post entitled “Connor McDavid Loses 2015 NHL Draft Lottery” where the author states “The much-hailed franchise player is the big loser in today’s NHL Draft Lottery festivities, being exiled to the moribund Edmonton Oilers.”  Comments from the post such as “While there is still a tiny flicker of hope that the Oilers will screw this pick up” or “… A guy like McDavid, you could really build a flawed, perennially-underachieving team around him for the next 10 years” illustrate the “hate” for the Oilers. Yes we know that the Oilers franchise has been mismanaged for years but let’s remember three key things: 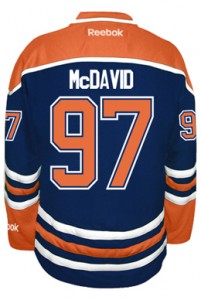 As poorly managed as the Oilers are (and let’s be honest, if Lowe and Mac T screw this up their days have to be numbered in the NHL) the Oilers have in fact acquired some great young talent at the forward position.  The trouble is that they need to improve at the defense and goaltending positions.  Regardless you can despise the Oilers all you want, you can hate the draft lottery process all you want, but Connor McDavid if he comes as advertised may in fact take the Oilers to the Promise land and another Stanley Cup.  Kids dream of playing in the NHL and winning the Stanley Cup.  Yes Connor was probably initially disappointed and perhaps shocked that the Oilers would be picking first overall in the June draft, but give it a couple of years he just might be hoisting The Holy Grail, Lord Stanley’s Cup over his head in the NHL’s most northern hockey market.

In an article from the Edmonton Sun, Sherry Bassin, current owner and GM of the Erie Otters (McDavid’s current junior team) who in a strange twist of fate is “currently embroiled in a $4.5 million lawsuit involving a $5 million loan to the junior franchise from Edmonton Oilers owner Daryl Katz that is currently before the courts.”  Had these things to say:

“He (McDavid) was just quoted saying the last three years in Erie have been the best three years of his life. I expect him to say the same thing about Edmonton for the next 15 years.”

“I don’t know how you measure winning this lottery that they won. You put that new building they got coming and now Connor McDavid coming, too? What a combination that’s going to be.” 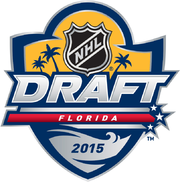 That last statement by Bassen suggests to me that Connor McDavid will not pull an Eric Lindros when the Oilers call his name at the draft in Florida in June.  The media has hyped this kid.  To be honest I have only seen a few highlight clips so I’m not even sure about how good he is, but when Wayne Gretzky says that Connor McDavid is the best prospect to come along in 30 years, you have to believe that this is one special player.

So no doubt Connor McDavid is a special player but to hear people slam the Edmonton Oilers for winning the draft lottery is just down right annoying.  I, as a long time Oilers fan, do not feel that the poor management team of the Oilers namely Kevin Lowe and Craig MacTavish deserve the riches of a generational player like McDavid, but the Edmonton Oilers won the draft lottery.  So to hear hockey writers such as Steve Simmons who stated “There is a reason that he looked unhappy, it’s because he was unhappy. He did the stiff upper lip, ‘I’m not going to say anything and I’m not going to come out and say what’s on my mind.’ This isn’t where Connor McDavid wanted to be drafted to.” and Michael Farber who stated, “He just looked so unhappy, he couldn’t even fake being happy about the Oilers.” is just disappointing.

For me as a hockey fan and a fan of the Edmonton Oilers I feel I deserve this.  The Oilers have been a cursed team since June 2006 when Chris Pronger wanted out of Edmonton mere days after losing game seven of the Stanley Cup finals to the Carolina Hurricanes.  I joke with my wife that I still lose sleep over that.  But now it seems as though the curse is finally over.  The Hockey Gods are starting to look favorably at the Edmonton Oilers.  And while the vast majority of you may not be happy with the Oilers winning the first overall selection (and you have to think that includes some NHL brass who are seeing McDavid potential go to a small market Canadian team in the West) my faith has been restored in a team that has honestly sucked the life out of me for the past nine years.  I am happy for guys like Ryan Nugent-Hopkins and Jordan Eberle.  I’m happy for other Oilers’ fans who have had to endure what we have over the past decade.  I’m happy for Connor McDavid and his family as the young men prepares for a life of professional hockey in the greatest League in the world.

In case you missed it, hee is a clip of the 2015 NHL Draft Lottery:

More about Connor McDavid, the NHL Draft Lottery and the Edmonton Oilers 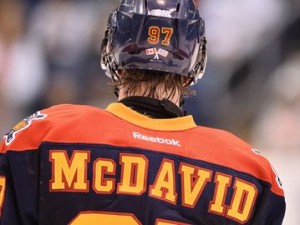 One thought on “Welcome Connor McDavid – from an Edmonton Oilers Fan”