The Merriam-Webster dictionary defines “classy” as having qualities that make someone or something special and attractive; or showing impressive character : very good, kind, etc.  It is this second meaning that resonates with me when I think about Ryan Smyth.  Showing impressive character.  As a hockey fan and fan of the Edmonton Oilers since their inception into the NHL in 1979 I have seen many superstars dress for the Edmonton Oilers.  The Wayne Gretzkys, the Mark Messiers, the Paul Coffeys, the Grant Fuhrs, the Doug Weights and the list goes on.  I have always said that Messier, Coffey and Gretzky (in that order) are my three favorite hockey players of all-time.  However there is another.  Yesterday was a difficult day for this hockey fan.  I mean as an Oilers fan who are we kidding this season has been the worst ever. The Edmonton Oilers will be missing the playoffs for the eighth straight season.  Hockey Gods please stop the banishment of the Oilers from the post season.  I’m not sure if the Oilers sold their soul to get to the 2006 Stanley Cup finals (only to lose in game seven) but that was the last time the Oilers were in the NHL playoffs.  Getting back as to why yesterday was a difficult day for this hockey fan.  I turned on the TV to watch the Oilers/Kings game on TSN or at least have some background noise as I played with my son.  When I flipped over to TSN Ray Ferraro was discussing Ryan Smyth and then I learned that Ryan Smyth was going to retire after the next two seasons.  Here I was thinking, hoping that the Oilers would sign Smyth for one more season.  The news of Ryan Smyth preparing to retire was devastating to this hockey fan.

Rayn Smyth has been my favorite player for quite some time.  My wife says that I have a man-crush on him.  Well the fact is that I have great respect for Ryan as a hockey player, as a person and as a family man.  Ryan Smyth is a hockey players hockey player.  Grit, determination, tenacity, hands, work ethic, hockey sense and pride.  I don’t know Ryan Smyth personally, but I think if we ever met we would be lifelong friends.  Ever interview that I see Ryan in he carries himself with class and professionalism.  Ryan has the classiness and passion of Wayne Gretzky, he rocked the hockey hair ok mullet like nobody else.  He is Captain Canada and bleeds orange and blue.  He should never have been traded from the Oilers in the first place… remember how the Oilers went in the tank for the last 20 or so games of the season after that? (thanks for that Kevin Lowe).  It is fitting that Ryan Smyth played his junior hockey for the Moose Jaw Warriors in the Western Hockey League.  The man is a warrior.  He has 386 goals and 456 assists for 842 points in 1,268 career NHL games with the Oilers, New York Islanders, Colorado Avalanche and Los Angeles Kings.  He needs one more powerplay goal for the Oilers to take sole ownership of a team record.  With all due respect to Glenn Anderson come on Hockey Gods make this happen tomorrow night against the Vancouver Canucks.  Is a Ryan Smyth hat-trick too much to ask for?  Who else remembers the story of Glenn Anderson running over a young Ryan Smyth’s foot at a team Canada training camp in the mid-eighties.

Sure wish the Oilers would have made Smytty the Captain this season.  Sure wish that Craig MacTavish would offer Ryan a contract for next season, but hey that might be too much of a bold move…  Ryan Smyth’s retirement press conference is set for a couple of hours.  You can bet it will be emotional.  The man wears his heart on his sleeve.  His is one of the last players that puts the game of hockey first and and puts his team first ahead of himself. 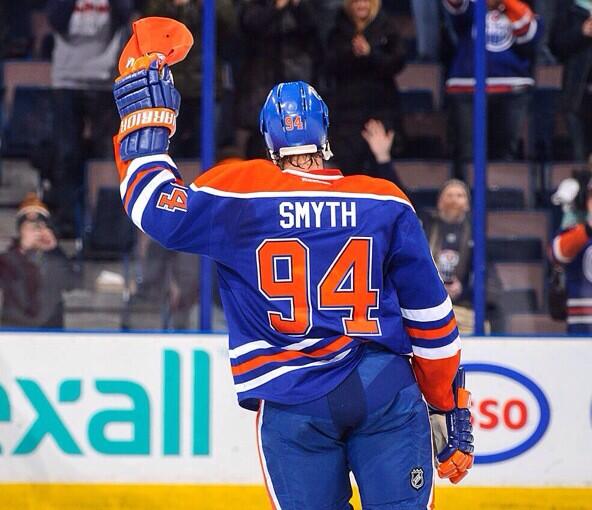 Ryan thank you for all of the entertaining hockey that you have provided us with over the years.  Here is but a sample of what some of your fans have to say about your tremendous career courtesy of tsn.ca:

No one got more out his talent than he did by sheer hard work, guts and determination. He is the last of a group of players that puts the team first ahead of his own needs and will be missed. Always a class act off the ice and while he does not have the numbers for the hall he certainly has earned a place among the Oilers franchisefranchise elite for who he is and what he accomplished. Congrats on a great career.

As much as Smytty’s play has deteriorated over the past two years, I still love him. He’s the epitome of class and the heart and soul of the Oilers. It’s gonna be tough to watch him hang up the skates, but I’m glad that he gets to play his last game ever with the Oilers at Rexall Place. I just hope he can get that elusive power play goal.

As an American, I always enjoyed watching Smyth. He’ll always be Captain Canada to me, and for good reason. Tons of class, grit and heart! May not have been the most talented guy to ever play for the Oil, but is and always was a fan favorite – again for good reason. Congrats Ryan!

Smyth was one of my favourite players growing up and still is. Who can forget that run to the Cup in ’06. If you ask me, they deserved that Cup a heck of a lot more than Carolina. Also, the playoff battles of ’97 & ’98 come to mind when I hear Smyth’s name. Wish the Oilers players now would play like you & Arnott did back in the 90’s. Enjoy retirement Ryan. You will be missed.

Very good player with the Oilers. Never seemed to be the same player after leaving EDM. Same as Linden in that regard. Some guys just fit a certain team and to me Ryan Smith fits that bill. Truly was a warrior for Team CAnada. Class guy. Good luck in your retirement.

A warrior on the ice, and a gentlemen off of it. THIS kind of player is what is sorely missed in the game today. I am so glad you are retiring as an Oiler player – not with some other team, then taking a ceremonial contract with the Oilers so you could retire as an Oiler. So much pride in you.

Ryan played the game the right way, brought it every night, played with his heart on his sleeve, and its rare to get guys like that. From a Canuck fan, i say congrats on your career, you were Great!!!

Next to Gretzky and Messier he is my favorite Oiler. He showed people how the game was supposed to be played, you give 110% every shift and sacrifice your body not for the $ but for the game. He should be an inspiration to any hockey player whether you play in the NHL or not. All heart.

As a flames fan,nothing but respect for Ryan. Class act.

There you have it.  Ryan Smyth you are a class act, a true hockey player and one of the last of a dying breed.  You make watching hockey fun for all of the right reason.  Good luck and best wishes to you and your family.