The Hockey Fanatic is adding a new feature to our blog.  The top 10 NHL Stories of the month.  These are the stories that this hockey fan feels were the most buzzworthy of the month.  Good or bad this is our opinion which may or may not reflect the opinion of other hockey fans out there.  We recommend that you share any feedback or thoughts with us via twitter @hockeyfanatics using the hashtag #hockeyfanatic.

Let’s get into the top stories for the first month of the NHL season.

1.  Suspensions – as a hockey fan we are getting really sick of seeing the high amount of questionable actions from the less-than-skilled players in the NHL.  Is it us or do the number of suspensions seems to be way up during this first month of the season?

2. The hot start of the Colorado Avalanche – really we do not think that Pat Roy is that great of a coach, regardless the Avalanche are off to one of their best starts in franchise history.  With a 4-2 win over the Carolina Hurricanes on Friday night the team has matched the best 10-game start in team history.  The Avs are currently 9-1 and lead the Western Conference in points one point of the San Jose Sharks.

3.  The hot start of the San Jose Sharks – Speaking of Sharks, the San Jose Sharks, just as they did last year, have gotten off to a quick start in the newly formed Pacific Division.  The play of Antti Niemi, Joe Pavelski, Jumbo Joe Thornton, rookie Tomas Hertl and others has shown that the Sharks may be an early favorite for Cup contender.

4. The great start by the Calgary Flames – the Flames were supposed to be terrible with a cast lacking an all-star, no proven starting goaltending and a lack of sniper, the Flames have shown that results will come if the effort is made.  Bob Hartley has this team putting in an honest effort in each and every night thus far.  Although the Flames are 4-4-2 through their first ten games, it is better than where most people had them pegged.

5.  The poor start of the Edmonton Oilers – another new coach same old results. An extremely poor showing thus far from this Oilers’ fans perspective has the Oilers again in last spot in the Western Conference.  This team cannot catch any breaks but honestly this team is in desperate need of a starting goalie and some size up front.  What is wrong with the Edmonton Oilers?  Well it startes with the fact that they give up nearly four goals per game.  This team will miss the playoffs for the eighth consecutive season and may be out of it as early as November.  Pathetic.

6.  The play of St. Louis Blue Alex Steen – Steen started to show some strong offensive upside last season.  Currently he sits sixth in league scoring a mere 3 points behind Henrik Sedin (who is second) having played five (count them 5) less games that Sedin.  From the games we have seen, Alex Steen has been flying out there.  A very consistent effort for the speedy forward.

7.  The hot start of Dallas Stars rookie Stars rookie RW Alex Chiasson –  on Thursday night, Chaisson scored another pair of goals, giving him 11 goals in 16 career games. His eleven goals on 46 shots gives him a 23.9 shooting percentage, best among all players with at least 10 goals since the start of last season.  Thumbs up to Dallas in the early going this season.

8.  The cool new Dallas Stars uniforms – love the green, love the logo and love the new energy in Big “D”.  Their jerseys are an instant hit with the home green jersey earning rave reviews from this hockey fan. 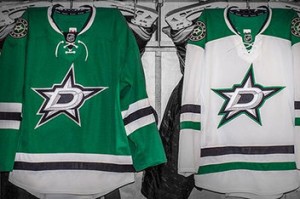 9.  The play of Flames rookie Sean Monahan – nine points in ten games is a great surprise for this 19 year old from Brampton, Ontario.

10. The dismal play of the New York Rangers – with AV at the reigns many fans expected that the New York Rangers would be one of the dominant teams in the Eastern Conference.  After the first month, the Rangers currently sit 15th out of 16 teams with only the woeful Flyers behind them in the standings.  Two wins in eight games is not going to cut it in any professional sports league, let alone the NHL.  The blueshirts need stronger performance from Henrik Lundqvist in goal as well as more offensive production from their forwards.  An Oilers/Rangers trade coming up.  How about Yakupov for Justin Falk or Marc Staal?  You never now, you just never now.  Regardless both the Oilers and Rangers need a kickstart.

It has been an interesting first month of the season, lets see where we are next month and how many teams will be out of the race in November.