The Edmonton Oilers last won the Stanley Cup in 1990.  The last time a dynasty ruled the National Hockey League.  Since then the Oilers have missed the playoffs thirteen times and counting.  The last time they made the playoffs in 2005-2006 they did so with 95 points in the regular season.  They ended up losing the Stanley Cup in game seven to the Carolina Hurricanes… a fact that still does not sit well with this Oilers fans.  The Oilers had no reason losing to the Hurricanes in the finals.  I’m not going to get into the reasons but the Cup was theirs for the taking.  The team has not skated on playoff ice since.

Now to set the record straight I’ve been an Oilers fan since their first NHL season when I was barely old enough to stand.  I’ve seen the good times and bad times, and I am a die hard Oilers fan.  However I am truly questioning my allegiance to the orange and blue.  I simply cannot continue to be an advocate of the futility that is Oilers hockey.  What is it five coaches in six season?  Brutal.  Although I liked Kevin Lowe as a player, as a hockey manager I’m not so sure just how great he is.  Same with MacT.  The Oilers fired him as coach and now they bring him back in a more powerful position.  Now I will say this that MacTavish is a close friend of Oilers’ owner Daryl Katz and I know that MacT was recently battling some health issues so I can cut some slack there.  I also know that MacT tried to land some size and goaltending in the off season… but he failed on both accounts.  The Oilers have become the kicking post of the league. 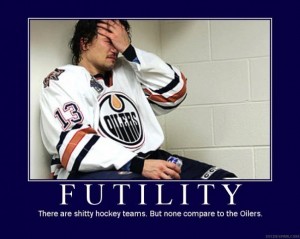 So what is wrong with the Edmonton Oilers?  Well I feel as qualified as anyone to discuss this topic.  I, as have all Oiler fans, have endured some brutal hockey in the past twenty years.  The last seven years tops it off though and enough is enough.  In fact there is a ton of Edmonton Oilers jokes out there that perhaps are justified:

Q: What do the Edmonton Oilers and the Titanic have in common? A: They both look good until they hit the ice!
Q: Why are the Oilers like grizzly bears? A: Every fall they go into hibernation.
Q: Why do the Oilers suck at geometry? A: Because they never have any points.
Q: What’s blue and orange and goes down the toilet faster than Liquid Plumber? A: The Edmonton Oilers
Q: What do a fine wine and the Edmonton Oilers have in common? A: They both spend a lot of time in the cellar, cost too much and are only enjoyed on select occasions.
The list goes on…

10 Things Wrong with the Edmonton Oilers:  A Fan’s Perspective

There are probably more than ten things, but this is a list of the more obvious areas that the Oil need to address and address soon if they are to retain their overly loyal fan base.

I’ve played hockey, officiated hockey, I write about hockey and I watch a lot of hockey.  I also have a degree in business and marketing I am a true hockey fanatic.  Yet I cannot believe that the Oilers have failed to address the areas above.  I am really at a loss for words with their performance out of the gate this season.  I think there have been a few bright lights in the play of Ryan Smyth, Ryan Nugent Hopkins, Jordan Eberle, Boyd Gordon and the fourth line.  As a hockey fan of the Edmonton Oilers I simply cannot take much more of this.  I do not know if I speak for many or any Oilers fans, but it has not been fun to watch.  The efforts have been weak and inconsistent.  A once proud franchise is now the laughing stock of the NHL.  Perhaps having the great Mark Messier as an advisor is a great step in the right direction as this team needs:

And isn’t that what it is all about?  If you are not winning you are losing.  If you are not first, you may as well be last.  That is a position that the Oilers know all to well.  Let’s see if the Oilers can get out of their seven year funk.  Right now it is not looking very well.