A while back, The Hockey Fanatic listed Seattle as the #4 city in North America that deserved an NHL franchise.  However we did find it interesting that Edmonton Oilers owner Daryl Katz was in Seattle yesterday meeting with officials who are building a new arena in the Seattle area.  An arena that locals believe will return the NBA to Seattle after the city lost the Supersonics in 2008.  A secondary tenant may in fact be an NHL franchise.  Edmonton Oilers owner Daryl Katz was in Seattle apparently scoping out a potential NHL market Monday with the Edmonton Oilers leadership group.

This is not the first time that Daryl Katz has looked at other suitors.  A few months back Katz and his team were in Quebec City meeting with officials in that province about proposed arena developments and such.  The fact that Seattle was Katz’s second trip to a city seeking an NHL franchise is concerning and although Wayne Gretzky was quoted as saying the chances of the Oilers leaving Edmonton are slim to none, Katz is a businessman who acquired the Oilers for $200+ million a few years back and has sunk a bunch of money into a team that has been cellar dwellers for a number of years since the 2004/05 NHL lockout. 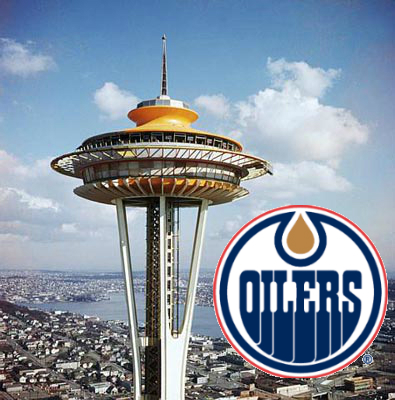 It’s no secret that Katz is looking for public money to help fund a new arena in Edmonton.  The city and Katz’s group are becoming increasingly frustrated as a deal cannot be finalized.  Edmonton’s proposed $450-million downtown arena is on shaky ground after city council denied a Katz Group request for more public funding a couple of weeks ago.  Katz Group officials issued a statement of their own in response to council’s motion.

“We share city council’s desire to develop a world-class arena for $450 million, but two years of design and engineering work tell us it simply cannot be done without sacrificing the public’s demands for an iconic arena that is well-integrated with surrounding neighbourhoods, or in a way that makes economic sense for both parties…”

The Seattle Oilers are not the team that should move to the mid-northwest.  The Seattle Coyotes maybe, the Oilers no way.  Not with the history that they Oilers have.  All of the great players, the dynasty years, the five Stanley Cups, the youth movement that is getting poised to be a definite Stanley Cup contender within the next few years.  Furthermore the Oilers have been one of the most successful financial teams in the past decade even with a sub-par teams as Oilers’ games continue to be sold out.  Edmonton is a strong hockey market.  Seattle is an unproven one.

5 Reasons the Oilers Will Not Move to Seattle

A scare tactic by Daryl Katz?  Maybe but the city of Edmonton, the province of Alberta and the Katz Group really need to get this deal finalized.  The lease at the Oilers’ current home, Rexall Place, expires in 2014.  All this while Seattle’s city council has recently backed a $490-million NBA/NHL arena deal with $200 million in public funding.

One thought on “Seattle Oilers? Wait Just A Minute”