So it appears that the notion of the Seattle Oilers was but a ploy by Oilers’ owner Daryl Katz to get the city of Edmonton to take note that a new arena deal needs to get done as building costs continue to rise the longer it takes to finalize a deal.  The Oilers deal with their current arena expires in 2014.  Formerly known as Northlands Coliseum, Rexall Place is it is now known is the second oldest arena in the NHL and has been around since 1974.  On Monday of this week Katz and a team of Oilers official ventured to Seattle to meet with officials building a new arena there.  The move outraged a number of Oilers fans promoting Katz to take out full page newspaper ads to apologize today.

“I reacted by trying to send a message to (Edmonton) city leaders that they should not take my support for a new arena for granted.

“The best I can say is that I did it because I’m fighting for a deal that will enable the team to stay in Edmonton — and not because I want them anywhere else.”

So while the Seattle Oilers are a no go, the city of Edmonton and Daryl Katz are still no closer to a deal to secure a new downtown arena deal. 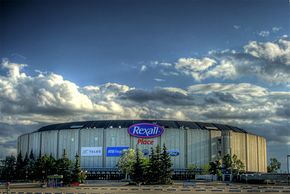 The fact is the Oilers do need a new arena.  Even with the team struggling on the ice in recent years resulting in top drat picks being acquired as a result of the teams poor performance the Oilers continue to sell out their home games.  According to the Team Marketing Report, the Oilers had the fourth-highest average ticket price in the NHL last season at $70.13, almost $13 over the NHL average. Their premium ticket average price of $182.66 also ranks fourth, nearly $50 above the league average.  So the Oilers have been performing well financially, just not on the ice.  The fan base of the Edmonton Oilers is strong… stronger than most teams in the league.  A new arena would allow for upwards of an additional 1,500 to 2,000 seats and state of the art luxury suites for the business community.  Edmonton is very much as prized hockey market as Sportsnet’s Mark Spector writes.

The gist of the arena deal is this.  According to an article in the Canadian Press,  “Katz and the city are deadlocked over funding for a new proposed downtown arena that is pegged at $475 million but — when loan payments, land fees and surrounding amenities are factored in — is actually over $700 million and rising.”  Spector suggest that Katz is looking for more money and wants an arena deal similar to what they have in Pittsburgh or Winnipeg.

Katz the speculator wants to build office towers near the rink, but Katz the hockey owner has demanded the City sign a long-term lease for floor space for its employees. He wants you to play a game of chance at his blackjack tables, with his revenues all but guaranteed.

Katz the speculator wants to boldly operate his own arena. Katz the owner wants the City to commit to buying advertising within the building long-term, wants the City to give him $6 million per season for operating costs, and apparently wants a major tax break once everything is up and running.

He pledged the first $100 million to the project four years ago, when this all began. He whittled that down to an investment of $5.7 million over 35 years and now that number has all but evaporated.

The City of Edmonton wants to keep the Oilers in Edmonton but make no mistake about it, they are not about to give in to all of Daryl Katz’s demands.  Just like the current NHL lockout there is a deal to be had, it just needs to be fair for both sides.  Funny how business in hockey is ruining the sport for many fans, employees and in some cases players.

Spector on Katz’s visit to Seattle