As hockey fans. it is our job to critique our favorite teams, players and yes the officials.  I figure that we are the ones purchasing tickets to the game, jerseys and other merchandise, Center Ice packages for viewing our teams games etc etc.  So as a long-time hockey fan it still irks me to see poor officiating in the game.  For t he record, I played the game and I was also a referee for a couple of seasons.  Officials are human, I get that, but in this day and age with the technology that we have, we really need to do something about missed calls, phantom calls and downright head-scratching calls made by the officials.

Case in point, I am watching the Edmonton Oilers and the Colorado Avalanche in an afternoon affair yesterday.  The game, I believe was tied one one, when the Oilers came down and blitzed the Avalanche with Ales Hemsky and Same Gagner converting on a very strong play resulting in what appeared to be the tying goal for the Oilers.  Yet the referee who appeared to have a perfect view of the play whistled the play down and waved off the goal.  The Oilers were livid and rightly so.  The official turns on his microphone for the crowd and announces “no goal and no penalty”.  Well no kidding Sherlock.  I believe the official was Francois StLaurent (as I don’t think that Paul Devorski would have missed this play).  A team like the Oilers have a hard enough time scoring as is, and then the refs take a clean goal away from them again?  And it is not the first time that it has happened in recent weeks.  In a league that is trying to increase scoring, missed calls like this simply need to be reversed… or at least the correct call needs to be made in the first place.  Louie DeBrusk the color-man for the Oilers even stated that this was a bad call, a truly poor call… and he was right in his assessment.  Calls like this can really take a team out of the game.  Fortunately the Oilers were able to tie the game forcing a Shootout only to lose the game in the end.  This was a game that the should have won in regulation and would have won in regulation had the right call been made.  So don’t tell me that NHL officials do not have a direct impact on the outcome of a game.  Just because the Oilers are 14th (second last) in their conference and are near the bottom of the league does not mean that they should be disrespected by the league and the officials.  This is a young team trying to find its identify.

The Oilers have not been getting a lot of breaks as of late.  There have been a number of missed calls, so many in fact, that Oilers players were getting a reputation about complaining about the non-calls.  As a fan and viewer of these game, I have seen the missed calls as well.  The Oilers’ players should have every right to question the poor calls as of late.  For the record the Oilers have the best powerplay in the league.  They have scored more powerplay goals than almost any other team in the league.  So why are they not getting the calls?

In the words of singing great Aretha Franklin, “RESPECT, find out what it means to me..”  Watch games the involve the leagues bottom dwellers and compare them to the league leaders.  How many times will the Detroit Red Wings get a break in a game, or a call to go their way?  Pay attention to this when you watch your next Red Wings game.  The answer is all of the time.  The Red Wings are one of the darlings of the NHL the past couple of decades.  Even the Bruins in the finals received some favorable calls.  I mean how many times can you punch a Sedin in the face and not get a penalty for it? 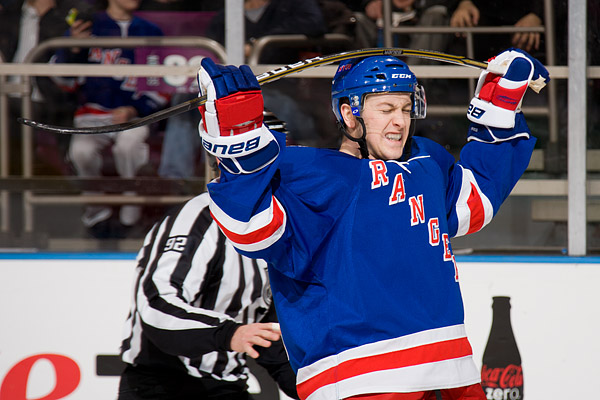 Is there a Double Standard?

Whether people will admit it or not there appears to be a double standard in the league.  The good teams tend to get the good calls while the “bad” teams can’t buy a break.  Has it always been like this?  Is that why the Montreal Canadiens have won 24 Stanley Cups?  Is that why a Canadian team has not won the Cup since 1993?  Not sure, but over the past years, the rich have gotten richer and the poor have gotten well… screwed.  When your down and out and have missed the playoffs for a bunch of years (See:  Edmonton, Florida, Toronto), sometimes you need a couple of breaks to turn the corner.  These teams work hard and deserve fair opportunity to win games and put together even a modest winning streak.  It is difficult when you can’t catch a break.  Of course with hard work the breaks (and wins) should come.  However I have seen way too many examples of teams getting screwed by phantom or blown calls.  There really is a double standard with how the elite teams are treated in the NHL.  This is very frustrating, not only for players and coaches but for fans as well.

So what’s the answer then?  My wife, who was watching the Oilers/Avs game with me, who is not an avid hockey fans but does understand and knows a lot about the game suggested that the NHL have a challenge rule similar to what the NFL uses.  What a great idea.  The NFL challenge rules allow for two challenges for each team during a game. A third challenge can be awarded to a team only if they are successful in both of their previous challenges.  Not every play can be challenged under NFL challenge rules.  The NHL could easily adopt a challenge option where blown or missed calls could be overturned.  They already look to Toronto for instant replay, why not for a coaches challenge?  Of course we wouldn’t want to slow the game down, but teams should have the right to contest a poor or missed call.  If the league does not want the players to question the officiating during the games, then having a challenge mechanism would be a win-win for both the league and the players.

As a fan I am frustrated by poor officiating.  Yes I know they are human, but perhaps that is why we should help them out with technology.  Making the right calls will make the game better.  It will allow for an even playing surface.  It may have meant that the Oilers would have completed a victory over the Colorado Avalanche yesterday.

One thought on “Hockey Calls: The Rich Get Richer”