Every year a new crop of youngsters enter the NHL with hopes of one day raising the Stanley Cup.  Not all will be so lucky.  Even less will win the Stanley Cup in their first year just as Boston’s Tyler Seguin accomplished last year.  The list of 2011-2012 NHL rookies is quite impressive.  Nearly ever team has had a rookie make an impact this season.  So who will be the NHL Rookie of the Year for 2012?  Early results suggested that number one pick of the Edmonton Oilers, Ryan Nugent-Hopkins would claim the Calder trophy, and he still might, but a shoulder injury has limited his production over the past month and a half.

I expect one of these seven NHL rookies to win the Calder Trophy as NHL Rookie of the Year for the 2011-2012 season.  Our pick (providing he comes back to play another 20-25 games would be Ryan Nugent-Hopkins of the Edmonton Oilers.

Here is a look at the top NHL rookies as of February courtesy of NHL.com. 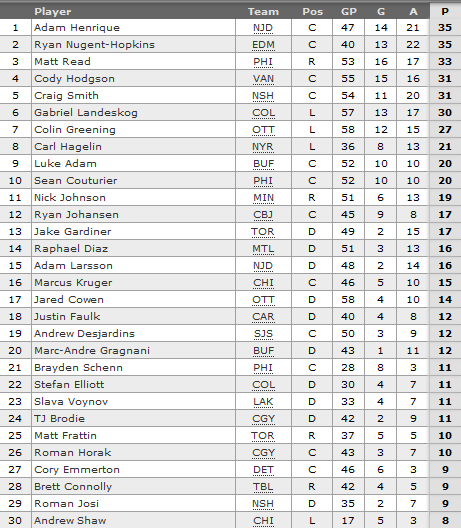