I have been a diehard Edmonton Oilers fan since I was seven years old. I was privileged to watch the many greats who have donned Oiler orange and blue throughout the years.  Yes maybe we were spoiled by a lot of that earlier success after all the Oilers won their first Stanley Cup in only their fifth year of existence in the NHL.  Now it has been twenty-three long seasons since the Oilers won their last Stanley Cup.  The past seven seasons the team has missed the playoffs.  Oddly enough the last time the Oilers were in the playoffs they were two goals away from winning the Stanley Cup as they lost in game seven to the Carolina Hurricanes.  I still cannot believe they lost that year.

The Hockey Gods have not been positive towards the Edmonton Oilers in recent years.  As a hockey fan this truly has become something of a difficult thing to accept.  I now, for the first time ever, question my faith to the Edmonton Oilers.  I am really thinking that I need a new team to cheer for.  I cannot continue to support a team mired in futility.

What is Wrong With the Edmonton Oilers?

The Oilers franchise was once storied with the likes of Wayne Gretzky, Paul Coffey, Mark Messier, Grant Fuhr, Jari Kurri, Glenn Anderson, Doug Weight, Ryan Smyth and others who hockey fans admired and loved to watch.  The run and gun style of the Oilers made them an entertaining team perhaps the most entertaining team to watch in all of professional sports, but things have changed. 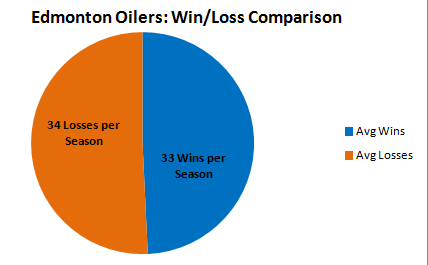 The futility continues and it is hard to watch for long time hockey fans of the Edmonton Oilers.  So then the question is just what exactly is wrong with the Edmonton Oilers?  From this fans’ perspective here is a list of ten areas that have set the Oilers back.

You have to think that the Oilers will be better next year.   But will they?