Thursday, February 2, 2012 was the night Sam Gagner became a hockey legend.  On this night the Edmonton Oilers would play the Chicago Blackhawks in game 51 of the season.  The last time the Hawks were in Edmonton, the Oilers trounced then 9-2 with the Edmonton crowd chanting “We Want 10, We Want 10”.  In a pre-game interview, Hawks forward suggested the Chicago would make the Edmonton fans eat their words.  In fact, the game started as though Kane was a prophet as the Blackhawks took a 2-0 lead.

Taylor Hall got the Oilers on the board with a pass from Sam Gagner.  Five minutes later, Gagner who came into the game with five goals on the season scored his sixth of the season off of a scoring play from Jordan Eberle and Andy Sutton.  The game went back and fourth, but the night ended in spectacular fashion for Sam Gagner.  Gagner had done something that no other player had done in nearly 25 years.  Sam Gagner would end up with eight points on the night scoring four goals and adding four assists.  Very few players have ever scored eight points in a single NHL game.  In fact Gagner is one of only a dozen players to complete the feat.  Wayne Gretzky (twice) and Paul Coffey were the only Oilers to have scored eight points in a single game.  Gagner got his eight point of the night with 3:45 left in the third period as chants of “We Want 10, We Want 10” again emerged from Oilers fans.  Fans were alluding to the current record of ten points in a single game achieved by Toronto’s Darryl Sittler in a 1976 game vs, the Boston Bruins.  Sittler called Gagner congratulating him on the amazing feat. 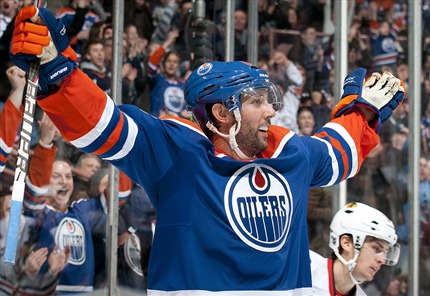 Sam Gagner sealed his fate as an Oilers legend as he will forever be mentioned with the likes of Wayne Gretzky and Paul Coffey.  As a hockey fan and a fan of the Edmonton Oilers this was a pretty special night.  So special in fact that TSN commentators performed a pretty classy act themselves as they name Sam Gagner the first, second and third star of the game.  Something that only happened once before to Maurice the Rocket Richard.

Check out the boxscore from Gagner’s spectacular game.  More from TSN here and here.

People will remember this for a long time.  Sam Gagner has delivered the hockey fan moment of the week.

One thought on “Hockey Fan Moment of the Week: Sam Gagner’s 8 Points in a Single Game”