I am a huge hockey fan.  I have played the game, I’ve officiated the game, I watch the game.  I am now also becoming a hockey dad for the first time.  I am a passionate hockey fan.  I love the beauty of the game, the sound of freshly sharpened skates carving up the ice.  I love the feeling of the air blowing through my hair.  I love pretending to score the Stanley Cup winning goal.  I love watching my son play hockey and I love seeing the posts and updates for my friends children as they play hockey.  BUT I have an issue with bullying, intimidation and shortening of the bench in minor hockey.  I am all about equal playing time in minor hockey.  For those that do not know, “shortening of the bench” means that basically a certain player or players get more ice time during a game while others simply sit on the bench and watch.  It is based on the coach’s decision.  You see it happen in the National Hockey League all of the time.  The fact is that it should never happen in minor hockey.  In fact I feel so strongly about this topic that as I stated on Facebook, to all you coaches who shorten the bench in minor hockey wake the f**k up.

I wanted to share a saddening post that describes why a nine-year-old boy quit hockey.  Now, although I do not know him, we live in the same city as this family, so it does hit close to home.  The post was written by John McDonald and was featured on infonews.ca.

I have re-produced it here in its entirety:

KELOWNA – A young hockey player made a heart-breaking decision to quit his hockey team with only two games left in the season and his father’s written reasons for him leaving may leave you shaking your head… or reaching for a tissue.

Yannick Lescarbeau wrote an open letter to everyone on his son Sam’s team explaining his decision. He didn’t attack anyone and he didn’t try to cause trouble. Instead he expressed his appreciation for the coaches and remained supportive because in many ways, it appears Sam loved being a member of the West Kelowna Knights.

”He has fully embraced the Knights, made serious new friendships and he had so much fun with each and every kid on that team,” Yannick wrote. “After the first practice, Sam said to me in the car with a big smile… ‘Dad, I think I am fitting in with those guys.”

The Lescarbeaus don’t take quitting lightly, he wrote, but he explained why it was acceptable this time, given the circumstances.

“It was important to share why Sam and I decided to leave the team,” Lescarbeau wrote. “Like every nine-year-old on that team, Sam dreams and lives hockey, and when hockey is no longer fun, when you find yourself crying on the bench because as a nine-year-old, you have only played two shifts in the game, no matter how important that game is… it is time to have a talk with yourself and re-evaluate why we do this.”

“On the ice and on the bench, Sam no longer felt part of the team and it was really sad to see him crying in the middle of the bench with his gloves off when he watched the same kids over and over on the ice. Too often this season, I saw players with sad faces or crying on the bench and looking at me with their small eyes and disappointed little faces to see if we were going to put them back on the ice. Too many times on the drive home, my son asked me, ‘Dad, I thought I played hard today, why did I not play in the third period.'”

Lescarbeau emphasized he has no personality conflict with the coaches of the Westside Knights although he clearly disagrees with their coaching style.

“When the fun is no longer present, there is no good reason to continue the pain, and we reached that point too often this year, and in my opinion, too many times when the situation was not warranted,” he wrote. “As a hockey dad, as a coach, to win as a team and lose as a team is a priceless concept that should be cherished and valued more than winning at all cost with only a few (players). This year’s Knights philosophy is clearly not for us. This was not a personality conflict with the coach, but rather a hockey philosophy difference.”

A parent of another Knights player, who asked not to be named, said he agreed with the reasoning.

“At that age, if your kid’s crying on the bench with no feedback from the coach about what he did wrong, then something’s not right,” said the parent.

The Knights of West Kelowna are a spring hockey club described as a developmental hockey program for young players from the local area.

Attempts to reach Lescarbeau for an interview were unsuccessful.

Kudos to Mr. Lescarbeau for penning the letter.  You should win the “Hockey dad of the year award” for taking this initiative.  Regardless of whether this was a Spring League (with no formal rules), shortening of the bench of nine year olds is a reflection of terrible coaching and even worse parenting.  Hockey is a game, it is a team sport.  Get it T-E-A-M sport?  Wayne Gretzky the game of hockey’s greatest player of all-time once said something to the effect that “… no one player is greater than the team.”  He also said that “the only way a kid is going to practice is if its total fun for him…and it was for me.”   Hockey should be fun for kids.  At nine years old you are still a kid.  The coaches of this particular installment of the Knights of West Kelowna have taken the fun out of the game for young Sam and perhaps others on the team.  To be honest this disgusts me to my core.  Equal playing time is where the focus should be not on shortening the bench.

Shortening of the bench at this age is wrong on some many levels:

If you read the comments of the above post you will see that there are still good hockey coaches, hockey parents and hockey mentors out there.  Take Aaron Konecsni of BC Hockey who replied “Sorry to hear about Sam’s experience.  Enroll him in our AKHOCKEY prep camp on me.  Hopefully we can get him having fun again!”  Good on you Aaron.   See that is what it is about at nine years old or at 18 years old for that matter… having fun.

Children play sports for a wide variety of reasons, to play a game, to have fun, to get exercise, to be part of a team, to partake in a social setting etc.  Playing a team sport can help a kid come out of their shell and build confidence.  West Kelowna Minor Hockey Association has passed a new policy that will become mandatory where all players are required to have a parent/guardian take the Respect In Sport (Parent) course prior to participation.  I trust that all coaches follow something similar (and yes I know this was a Spring League) but the fact of the matter is, is that there is no room for this in minor hockey period.

For More Information on this program:  http://www.respectinsport.com/

Link to complete the Parent Respect In Sport Program:

One thing that many of you may not realize is that minor hockey registration in Canada is down and down quite a lot.  In fact according to recent reports while the population of Canada has grown by two million people in the past couple of years, the number of new novice registrations has not grown at all.  While cost and expense may be one reason, here are a couple of things to consider:

In 2010, a Canadian Heritage Research Paper on “Sports Participation illustrates how there is a declining trend in youngsters playing hockey in Canada.  It’s no longer the good ole hockey game but perhaps the good ole soccer game. 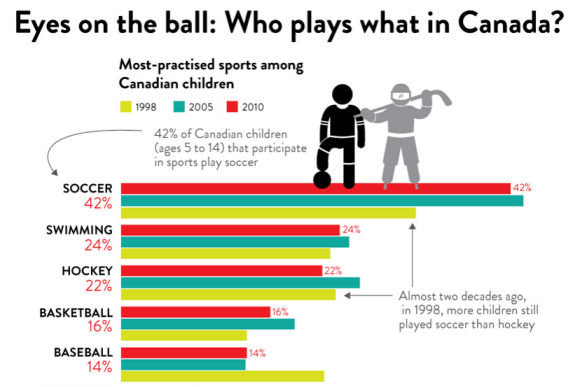 We should consider that incidents like shortening of the bench as discussed here are no doubt contributing to why parents are second guessing putting their children in hockey.  You don’t see coaches shortening the bench in soccer at age nine do you?

At nine years of age hockey players should be working on their skating and their shots not worrying about when they may see their next shift.  Coaches should be supporting the players and working to develop their skills whether it is their skating stride, their wrist shot or their passing.  Forget about the systems and think about how to promote creativity and confidence on the ice.

Sam, if you or your dad happens to read this, I would like to say good for you buddy.  Hockey is still fun and can be even more fun.  Stick with it for as long as you enjoy it.  Hockey Canada needs you and we need kids like you to help grow the sport.  Work hard and believe in yourself and there is nothing that you cannot do.  To Mr. Lescarbeau keep being the great parent and hockey dad that you are.  The spirit of playing the game should always be the most important aspect of the game.  Winning is an added bonus.  Someone has to win and someone has to lose, that is just how competition and games work.  It doesn’t mean that you cannot have fun regardless of what the final score is.

Mr. Lescarbeau I do not know if I could be as calm or professional as you were in this situation.  I NEVER want my son to be a part of the team where shortening of the bench is happening.  I have zero patience for that.  To the coaches in question here, you really need to re-evaluate your coaching methods and need to step back and look at the big picture.  A coach is defined as someone who teaches and trains an athlete or a performer.  A coach is a person who trains and teaches members of a sports team.  Members plural not just a select two or three.  Is the need to win outweighing the need for having fun?  Thee is no doubt that society has become a competitive place.  I mean there is more to it than that, even referring to leagues or team as “Selects” or “All-Stars” should be reconsidered.  Think about if it was your child that was on the bench and they were not not getting equal ice time.  You’ve paid hundreds, maybe thousands of dollars for your child to play and they are sitting on the bench while the coach shortens the bench to try and win the game?  What can possibly be going through a coach’s mind as players on their bench are crying?  Hashtag #embarassing. (Not for the child but for the coach).

Mr. Lescarbeau  you are the true coach in this instance by teaching your son a strong character building life lesson – to stand up for what is right and speak up for others.  Integrity goes a long way. Much respect.

My own son will be entering organized hockey this fall at age six.  I’m not putting any pressure on him to perform and I expect that the coaches will do the same.  The goal here is to have fun and enjoy hockey and enjoying being on a team.  Having fun and trying your best is what matters.  Sometimes you win sometimes you lose.  That’s just how it goes.  A real good coach knows that winning while playing everybody is the most rewarding.  Shortening the bench at this age is unnecessary.  To the coaches that partake in shortening the bench at this age maybe it’s time that you wake the f**k up.  Let the kids play.

Sam you can play on my hockey team any day.