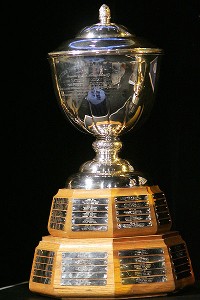 A lot of hockey publications put together their annual lists and quite often they are a little “out to lunch”.    The lists are often biased with East coast favorites and quite often are based on players who have recently over achieved or had but one great season.  Therefore The Hockey Fanatic polled some NHL hockey fans and came up with our own series of top players by position.  We begin with defensemen and look at the league top 20 defenseman for 2012.

If you don’t agree with the fans selections, email us  thehockeyfanatics at gmail.com and let us know who you think the top defenseman in the NHL are.  Selections are based on who you feel is the best overall defenseman and includes criteria such as defensive play, plus/minus, physical play, hockey smarts, points, goals, special teams and team contribution.

No shortage of Norris trophy candidates here.  A number of great defensemen and a few that you would most likely not expect to see on the list.