Welcome to the Chicago Blackhawks stats page.  The stats pages on thehockeyfanatic.com are meant to list what we as hockey fans associate with each
particular team.

Our stats pages will include our version of the all-time Chicago Blackhawks team as well as obscure stats about the team.  Note: Stats are as of the start of the 2011-12 season (unless otherwise indicated).

Did You Know?  The Chicago Blackhawks were founded in 1926 and are one of the original six team in the NHL.  The Blackhawk logo was named after the 333rd Machine Gun Battalion of the 86th Infantry Division during World War I which were named “The Blackhawk Division” and from Chief Black Hawk from the Sauk nation tribe was also a prominent figure in the history of Illinois. 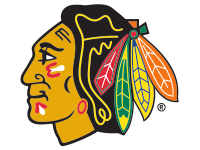 Top 25 Chicago Blackhawks of All Time