Hockey analytics is something that is still in its infancy stage and has not yet been widely adopted by teams throughout professional ranks. However that is starting to change. In recent years we have seen teams like the Toronto Maple Leafs, Edmonton Oilers and Florida Panthers all hire hockey analysts. Using those three teams as examples it is easy to understand why as those teams have not had very many winning seasons over the past decade.

Hockey Analytics –  is the discovery and communication of meaningful patterns in data as it pertains to the game of ice hockey.  Statistical information that can be used to predict trends to improve the performance of an individual, a line, a defensive pairing, a goaltender or as a team as a whole.

Tracking what teams do when they have possession of the puck can help determine things like puck possession, scoring chances, how teams spend their zone time and what duration of a game that a team is “in control of.  Hockey Analytics is about recognizing patterns to see if the trend will be sustainable or is it simply an anomely?  Some of the more common types of hockey analytics that have emerged can be found below.

CORSI – Named for former Buffalo Sabres goaltending coach Jim Corsi, who tracked shot attempts for and against taken by a team or player. A CORSI score is calculated by adding the sum of a team or players’s goals, shots on net, shots that miss the net, and shots that are blocked. It is different from Fenwick in that it does include shots that are blocked.  It’s used as a proxy for puck possession. For players, they are usually measured by “on-ice” corsi, or all of their team’s shot attempts while they’re on the ice.

FENWICK – Named for blogger Matt Fenwick, it’s very similar to Corsi and in most cases, can be considered interchangeable. Fenwick is the number of unblocked shot attempts by a team or player. It’s the same as Corsi, but excludes shots that are blocked. So Fenwick is essentiall shots + missed shots.  It’s used because over many games it’s a slightly better proxy for possession than Corsi. It’s not used exclusively instead of Corsi mainly because over smaller sample sizes, the larger Corsi number is more accurate in reflecting puck possession.  Common Fenwick metric include:

DEPLOYMENT – Player deployment metrics are used to track how players are used in game situations. Most common are zone starts, which show how often a player begins his shift in the defensive zone, offensive zone, or neutral zone. You’ll see these abbreviated as DZS%, OZS% and NZS%.

TIME ON ICE (TOI%) – The percentage of his team’s total ice time that a player is on the ice for.

PDO – A combination of shooting percentage and on-ice save percentage while a player is on the ice.

Some common hockey analytics metrics include:

Of course as with any form of analytics, you are only as good as your data.  you need to be able to trust your data, you need to question the data and you need to make sure that any decisions that you make as a result of the data will impact the bottom line and in hockey that is winning vs. losing.  You can do all of the trend analysis that you want, but if your team is not winning you can throw the statistical integrity out the window.  Swarm defense anyone? 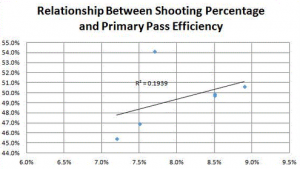