The Hockey Fanatic is back!  After taking a month away from blogging about hockey (as a result of the devastating Humboldt Bronco accident) I have decided to return with a post on the NHL’s final four.

We didn’t even make any playoff predictions this year.  However, we did make some regular season predictions as to which team would win the President’s trophy as regular season champ.  Interesting to note that we had Washington at number two and Nashville and number six.  Both look good as they enter the final four in the quest for Lord Stanley’s Cup.

Honestly in my NHL Bracket challenge I picked Nashville to win the Stanley Cup.  In my heart I wanted to pick the Winnipeg Jets, but I’m a firm believer that you have to lose first before you can win it all… and Nashville did that last year as they lost in the finals to the Penguins in six games.  So this year I felt that whomever was going to win the West would win the Stanley Cup.

About this Year’s Final Four

As are many hockey fans, I am excited for the Conference Finals this year.  We have four exciting teams looking to win it all.  Here’s a look at the NHL’s final four in the 2018 Stanley Cup Playoffs. 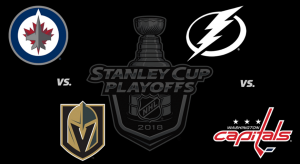 Tampa Bay Lightning (54-23-5) for 113 points in the regular season vs. the Washington Capitals (49-26-7) for 105 points.  Bother teams lead their respective division this season so it’s fitting to see them face off against each other in the Eastern Conference finals.  Let’s Look at how these teams match up and why they will win.

You know watching a lot of the playoff preview shows this season, for some reason there were not a lot of people picking the Lightning to come out of the East. A bit surprising to this hockey fan as Steve Yzerman has assembled a strong team in south Florida. The Lightning scored a league leading 296 goals during the regular season, and while the playoffs are much tighter this team can put the puck in the net.  Here are 5 reasons why the Lightning will win:

Here’s why the Capitals will win.

On the Western Conference side of things you have the first-year expansion Vegas Golden Knights (51-24-7) and the Winnipeg Jets (52-20-10). Two amazing teams that have reached the final four in different fashions. 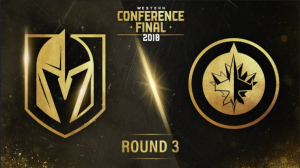 Here’s why they will win:

No one and I mean no one thought that the Golden Knights would reach the final four in the Stanley Cup playoffs in their first season of play. Vegas sportsbooks could take a huge hit if the Knights win the Stanley Cup.

Welcome to the North, home of Whiteouts and Winnipeg Jets. Here is a look at why the Jets will win.

This is the best final four in the NHL that we have seen in quite some time.  And even though many of us feel that it is time for the NHL to change their playoff format so that the best teams do not meet in the first or second round (wasn’t that Jets/Preds series a beauty?) this year’s final four is stellar.  We can only say one thing… may the best team win.  Let’s go boys!

Who we are picking

From the eastern conference we are going with the Tampa By Lightning in six games over the Capitals.  On the western side (and I am no way trying to jinx the Jets) but we are going to go with Winnipeg in seven games.  The Golden Knights are that good and they could come out and head to the finals in their first season.  Crazy.