Like many in Western Canada, we were saddened to learn of the passing of Dave Semenko earlier today.  He died after a quick bout of lung and pancreatic cancer.  He was only 59.  The Edmonton Oilers released a statement:

“Dave will be remembered as a fierce competitor, loyal teammate, fan favourite and dear friend to so many,” the team said. “His legendary toughness on the ice is surpassed only by his kindness and caring for others, and his equally legendary wit and sense of humour.” 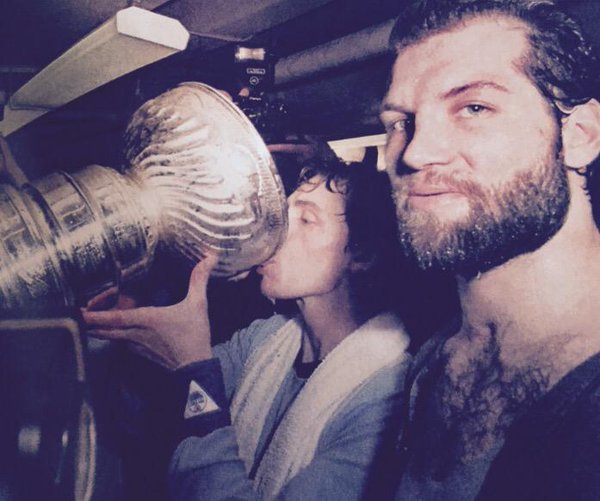 Longtime Oiler defenceman Kevin Lowe, called Dave Semenko the “Wayne Gretzky of the tough guys” in his book “Champions.”  And boy was he tough.  I have Semenko’s book “Looking out for Number One”.  As you would expect there are a lot of great storied including one from chapter sixteen where Semenko recalls:

The first fight I ever had in pro hockey was with Can Connor.  To this day, he claims that I caused him to go bald.  We got into a wrestling match during the first World Hockey Association game I ever played, in Houston against the Aeros.  Cam wasn’t wearing a helmet and he had a lot of hair at the time, so I grabbed some of it.  While I was hanging on to his hair, he was pulling at my pants, trying to get me off balance and flip me.  It was like a teeter-totter: Cam tugging my pants and me yanking his hair.  The fight itself was no big deal.  But sometime later, when the Oilers went into the NHL, Cam was traded to Edmonton.  When he showed up, I noticed he was getting a little shy up front.  Wouldn’t you know it, he gave me hell! He said I started the whole balding process.

That was Sammy as they called Dave Semenko.  As a young kid growing up in Northern Alberta, the Edmonton Oilers were my favorite team.  They were the best team in hockey and had a group of Boys on the Bus each with a distinctive personality.  Although my favorite players were Mark Messier, Wayne Gretzky and Paul Coffey, I always thought that Dave Semenko was an interesting player.  He was like a super-hero or a monster.  He seemed so much bigger than everyone else and seemed to destroy any other tough guy who would challenge in the ice ring.

Here’s a favorite memory of mine about Mr. Semenko. So back in the day the Oilers used to practice quite often at West Edmonton mall.  Every spring, usually in March they would practice at the mall and then the players would be paired off throughout tables in the mall to sign autographs.  One March when I was 11 or 12 I begged my dad to take our family to Edmonton to an Oilers game and to the mall for an autograph signing.  He agreed, so my dad, mom, my little brother and I made the four and a half hour drive from Grande Cache to Edmonton.  I was so excited that I brought a notebook and some pens to get some autographs.  On the Saturday we watch the Oilers practice at West Edmonton mall, and then after practice they would be signing autographs at throughout the mall.  I was so excited that I was going to meet Wayne Gretzky.  So we left watching the practice earlier so we could get in line for Wayne Gretzky’s table.  Unfortunately we were not the only ones who had this notion to get in line early.  The lineup for Wayne Gretzky’s table had to be at least a mile long.  So I got to the back of the line.  A few minutes later there he was, Wayne Gretzky sat down and began signing autographs.  I waited probably for a bout 30 minutes and the line barely moved.  I knew that my parents were not going to wait much longer, and sure enough, they told me I had to go.  So no Wayne Gretzky autograph.  My dad said let’s go find a shorter lineup.  So we walked down a little further in the mall and I saw the next table, there was a short little lineup and I couldn’t quite see who the players were.  As we got closer the table featured Don Jackson and none other than Dave Semenko.  My eyes lit up a little.  I got in line and within five minutes I was at the front getting an autograph from the meanest, biggest and probably nicest enforcer the NHL had.  I was shy and said thank you for the autograph and in a deep growl of a voice Mr. Semenko said “You’re welcome”.  I extended my hand to shake Dave Semenko’s hand and out came this massage hand that was as large as a grizzly bear paw.  He shook my hand and I was on my way.  I was on cloud nine.  My first ever autograph, and although it was not Wayne Gretzky’s signature, it made my day. (For the record I have never been able to get a Wayne Gretzky autograph.  Mr. Gretzky if you happen to read this, I’d still like one for my eight year old son).

Wayne Gretzky and Dave Semenko will always be tied together.  After all Dave Semenko was the Great One’s body guard.  We’ve all heard the stories and seen some of the footage.  There is a reason that no one touched Wayne Gretzky when he played for the Edmonton Oilers.  That reason was Dave Semenko. 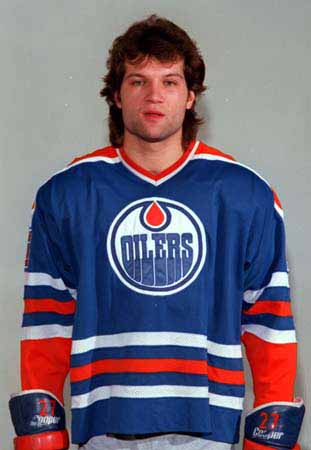 Here’s a couple of oldies but goodies.

Dave Semenko vs. Tim Hunter (wait for it)