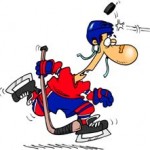 There you have it some wacky predictions for the upcoming NHL season. Stay tuned for our upcoming Division previews and NHL season award predictions.