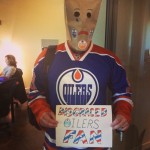 The Hockey Fanatic will be examining the futility of the Edmonton Oilers in a three part series this week.  After a 7-1 defeat at the hands of the Chicago Blackhawks last night and nearly a quarter into the 2014-15 NHL season the Oilers again sit in last place in the League.  The Oilers have missed the post season playoffs for a team record eight consecutive seasons.  As part of this series I will be looking at some of the analytical and statistical data of the Oilers futility compared to that of the League average.  As we sit today here is a look at the 2014-15 NHL standings.

The Oilers after a couple of poor efforts and a current six game losing streak sit in last place… again.

So why have the Oilers been as bad as they have for so long?  Well there are a number of reasons (and we won’t get into the poor management of this club yet).  We have commented on some possible mistakes the Oilers have made that have cost them a chance at the playoffs.   At the end of the game it is all about wins and losses and quite frankly the Oilers have simply not enough wins and way too many losses over the course of the past 8 NHL seasons.  Here is a look at some of the reasons for their troubles: 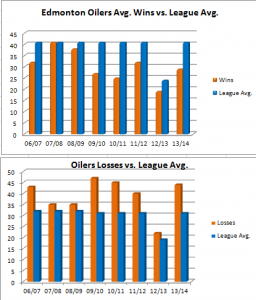 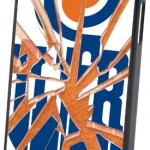 This franchise is broken.  We will continue our analysis in part two later this week.  One thing is for certain players, coaches and fans of the Oilers are at an all-time high with frustration.  Something has got to give.  This is not sustainable.  It is becoming an embarrassment to the team, the fans, the City of Edmonton and the NHL.  The thing is that there is no “quick fix” on the horizon.  The team’s GM has failed to address critical needs.  Upper management has failed at bringing in a coaching staff and management team that can propel this team into the playoffs.  The players have been inconsistent at best and the goaltending in recent years has been some of the worst experienced in the National Hockey League.  Daryl Katz has already written a letter to the fans once.  Not sure what he can do to silence the critics and fans this time out.  A major change (again) is inevitable.