Rookie Tomas Hertl of the San Jose Sharks earns our very first NHL Power Performer of the week with a strong showing in week one of the NHL season.  In just his third NHL game with the San Jose Sharks, rookie forward Tomas Hertl potted four goals in a lopsided 9-2 win of the Sharks over the New York Rangers.  This marks six goals in just three games for the rookie from the Czech republic.  Hertl was selected 17th overall in the 2012 NHL Entry Draft by the Sharks.

Of note of Hertl’s performance against the New York Rangers was his amazing fourth goal which is probably one of the best goals that you will ever see hockey fans.  In case you missed it, it is already all over Youtube.  This goal is sick.

Hertl has seven points, including six goals in his first three games with the Sharks.  After scoring his four goals vs. the Rangers, the young rookie has a smile from ear to ear as he was named the games first star.  His mother was in the crowd, proud as could be with tears in her eyes.  This was the NHL feelgood story of the young NHL season.  The Province had it right that if you picked Tomas Hertl in your hockey pool you will probably be #winning right now. 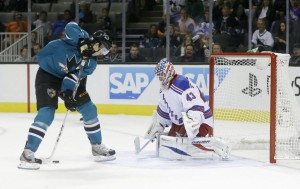 Rookie Tomas Hertl is The Hockey Fanatics Power Performer of the Week.