Last month the NHL released the new names of the updated NHL conferences.  In case you missed it and in case you forgot about the realignment that is taking place for the upcoming season here it is. A couple of other key reminders:

The Stanley Cup Playoffs will still consist of 16 teams, eight from each conference, but it will be division-based and a wild-card system has been added.

The top three teams in each division will make up the first 12 teams in the playoffs. The remaining four spots will be filled by the next two highest-placed finishers in each conference — regardless of division — based on regular-season points. It will be possible for one division to send five teams to the postseason while the other sends three.  The seeding of the wild-card teams within each divisional playoff will be determined by regular-season points. The division winner with the most points in the conference will be matched against the wild-card team with the fewest points; the division winner with the second-most points in the conference will play the wild-card team with the second-fewest points.

The Red Wings and Blue Jackets have moved from the Western Conference to the Eastern.

The new Central Division in the Western Conference includes the Chicago Blackhawks, St. Louis Blues, Nashville Predators, Minnesota Wild, Colorado Avalanche, Dallas Stars and Winnipeg Jets, who are moving from the Eastern Conference to the Western. 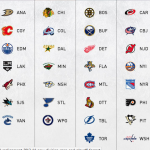