Wow the first round off  the 2013 NHL Playoffs has been an emotional roller-coaster for hockey fans.  Fans of the Canucks saw their beloved Canucks swept by the San Jose Sharks in four games marking the first time that the San Jose Sharks have swept a playoff series.  Fans of the Toronto Maple Leafs experienced bitter defeat as the Leafs had a 4-1 lead vs. the Boston Bruins late in the third period of game seven only to see the Bruins score three to tie it up, the tying goal coming with under a minute left to play and then win it nearly seven minutes of overtime.  Ouch.  Then you have those #peskySens who pulled a minor upset of the Montreal Canadiens in five games and the defending Stanley Cup champion Los Angeles Kings who won four straight to knock of the St. Louis Blues in six games.  It has been an up and down playoff for hockey fans depending on which team or teams that you are rooting for. 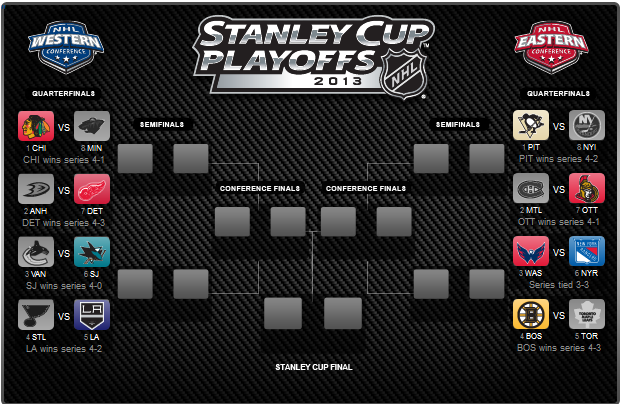 Emotions of a Hockey Fan

The Happy-T0-Just-Be-There Hockey Fan – their team just snuck into the playoffs on the last weekend of the regular season and you’re just happy that your team is playing meaningful games in April.

Then of course you have the hockey fans whose team fought so hard all season and had a great record during the regular season and then runs into a hot goalie or a hot team and ends up being upset in the first round even though they were favored to go deep in the playoffs.  Or the hockey fan of the team that plays so hard only to lose game seven of their series to the

Then of course you have the true diehard fans. You know the ones that take the game a little too serious.  The hockey fans that yell at the television and jump on and off their team’s bandwagon depending how their team is performing.  The Fairweather Hockey Fan is one who is passionate yet sometimes lacks the understanding of just what the players, coaches and teams go through to play an 82 regular season schedule and then a two month tournament to declare the Stanley Cup Champion.  These are the hockey fans that were their emotions on their sleeves, on their faces and forever celebrate their

team’s wins and take a long time to get over their losses.

The NHL Playoffs have a definite level of intensity.  Hockey fans can get pretty intense as well.  A missed called or two will always drive the i

re of the Angry Hockey fan who is just a little too intense at times.  These are the fans who think they are on the ice or could do a better job than the officials.  The hockey fans are the ones who’s anger sometimes gets the better of them as they yell profanities and one liners at the officials.  You cannot say that hockey fans are not passionate.  Some fans take it a little to the extreme.  Remember folks hockey is a game.  It is meant to be fun.  There will always be winners and there will always be losers.

The Frustrated Hockey Fan is one whose team can never catch a break.  Perhaps a missed call by the official or simply an injury to the teams best player.  Perhaps one too many overtime losses or perhaps the team simply under-performs and is ousted from the playoffs too early.  Whatever the case there are some hockey fans in markets that have suffered for long periods of time (See Toronto Maple Leafs fans, Edmonton Oilers fans, Buffalo Sabres fans etc.)

Next up we have the Not Impressed Hockey Fan.  You know the type.  Their team dominated in the regular season and they end up drawing a difficult first round opponent.  Or the fan whose team has to wait an extra day in between games six and seven of the finals.  (Hmm I seem to remember something like this happening during the finals of the 1994 Stanley Cup Playoffs between the Vancouver Canucks and New York Rangers.  I still think the Canucks should have won that year.  Regardless, the Not Impressed Hockey fan is one that is very critical of their team, coaches and sometime the officials and rightfully so in these cases.

The Edge of Your Seat Hockey Fan is the fan that cannot watch the last minute of the game.  Perhaps it is a hockey mom of one of the players or perhaps a wife.  The game becomes a little too emotional for them to watch although they continue to peak through their fingers as they hold their hands up to their faces.  These fans experience extreme highs and the lowest of the lows.

The Proud Hockey Fan supports their team no matter what.  Through thick or thin, wins or losses, this type of hockey fans experiences a sense of pride when their team laces up their skates and steps out onto the ice for the NHL Playoffs.  Fans of teams such as the Montreal Canadiens, New York Rangers, Winnipeg Jets and Chicago Blackhawks are typical proud hockey fans.

With being a hockey fans can come the devastation of the a game seven OT loss, or a four game sweep to a team that had twenty less points that you during the regular season.  The Disappointed Hockey Fan is one where the losses sting just a little bit more.

The Banged Up Hockey Fan is one who has been through a long season with their team.  Suffered through inconsistencies with the teams performance but is still happy to be watching their banged up team limp into the playoffs.  These are the hockey fans who, quite often, deserve so much more and you just want to see their team win the Cup just once.  You know team like the Winnipeg Jets, the Toronto Maple Leafs and previously the Chicago Blackhawks and New York Rangers.

Finally we have the exhilaration of victory.  The hockey fan who gets to see their team hoist the Stanley Cup.  The Triumphant Hockey Fan who gets bragging rights for a full year.  Smiles from ear to ear.  Stanley Cup viewing parties or if you are lucky enough tickets to the Cup clinching game.  These are the emotions that all hockey fans want but so few get to experience (especially if you are a fan of a Canadian NHL hockey team to which no Canadian team has won the Stanley Cup since 1993).  The feelings of joy and happiness of your team winning the Stanley Cup.  Ah there is nothing better.

Most sports fans are passionate, but hockey fans take it to the next level.  Especially here in Canada.  They say that “Hockey is Canada” and in a way that is true.  Hockey is so much a part of our lives here in Canada.  Tonight the Toronto Maple Leafs lost in an amazing game seven comeback by the Boston Bruins.  It just didn’t seem fair.  The Hockey Gods are not smiling down on the Canadian NHL teams as of late.  However I think that for one night, or at least for a few minutes, most Canadians who tuned into the game were Toronto Maple Leafs fans for that brief moment in time.

Enjoy the rest of the playoffs hockey fans.  We know that we will.