Ooh it feels a little like Christmas Eve doesn’t it?  We are on the eve of the Stanley Cup Playoffs.  As hockey fans this is what it is all about.  There is no better tournament in all of sports.  Even though this was a condensed season, hockey fans are giddy with excitement as we see some familiar match-ups and the first time since 1994 that all six original six NHL teams are in the playoffs.  (Yes even the Toronto Maple Leafs). 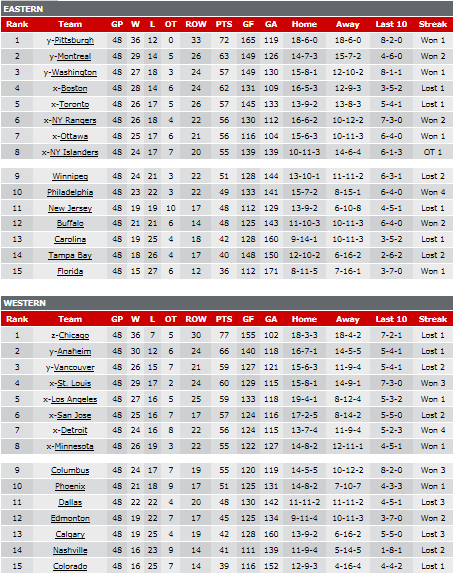 This has been a decent season.  We have seen domination by the Chicago Blackhawks and Anaheim Ducks in the West and we have seen strong performances by the Pittsburgh Penguins and Montreal Canadiens in the East.  With four Canadian teams in the NHL playoffs. could this mark the first time since 1993 that a Canadian team hoists the Stanley Cup?  We’ll find out over the course of the next two months.

Last year our Stanley Cup playoff picks were a little off.  So here is a look at how we think the Playoffs are going to shake out.

San Jose Sharks (6) vs.  Vancouver Canucks (3)
Hockey Fanatic Prediction:  I want to pick the Canucks but my gut tells me Sharks in seven games.

Based on these predictions, the round two match-ups look like this:

San Jose Sharks (6) vs. Chicago Blackhawks (1)
Hockey Fanatic Prediction:  Chicago in six games.  Although if there was a team to take out the Hawks it very well could be San Jose.

If we had to pick a couple of dark horse teams to go to the final we would pick:

I would like to think that the Leafs could make a run, but goaltending issues may creep in.  In a shortened season anything is possible though (well except for the Edmonton Oilers making the playoffs).