Earlier this week the NHL announced the proposed plan for realignment. Working with the NHL Players’ Association, the National Hockey League’s new realignment plan includes four divisions in two conferences with wild-card spots for the playoffs. The breakdown shapes up like this: 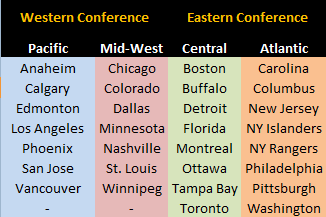 We actually like this proposed plans although it is not without flaws.  While this realignment plan is yet to be finalized pending approval from the Players’ Association, the fact that the NHL and the NHLPA have worked on this collectively should mean that this is close to a done deal.

So looking at this proposed format, there are a number of pros and cons (depending on which team you are), however from a fans perspective this looks pretty good.

Of course the proposed realignment plan is not without its faults.

Here are some options that the NHL should consider for the four divisions:

5 Teams That Benefit the Most from NHL Realignment

Overall the NHL realignment plan looks pretty solid.  While we are not entirely sold on the playoff picture, this proposed realignment could be good for fans of Canadian hockey teams and fans of the NHL in general.  Let’s hope the NHLPA approves it.