The Business of Hockey

Last week we reviewed the franchise value of the thirty NHL clubs in preparation for the latest report due from Forbes.  Currently the business of hockey is going through some difficult times with the NHL lockout that was imposed by League commissioner Gary Bettman on September 15, 2012.  The third lockout and fourth work stoppage in the past twenty years.  Billionaires fighting over the pie with millionaires.  Look for this standoff to be a long one. Too many issues to negotiate over means this lockout will last for quite some time.  There will be no NHL season in 2012-2013 just as there was not NHL season in 2004-2005.

So just how much money are NHL teams making?  Are the owners losing money?  There has been some discussion that perhaps the league should reduce the number of teams and remove some of the financially challenged teams, which many suggest is in the five to eight range.  The team worth of the top teams continues to improve perhaps at the expense of the poorest teams.

The valuation of the 30 NHL hockey clubs again depicts the Toronto Maple Leafs as the most valued franchise in the game with an estimated valuation of around one billion dollars.  This despite the team missing the NHL playoffs for seven consecutive seasons.  Here is a look at the valuations of the 30 NHL franchises for 2013.

Forbes has been conducting these lists for over ten years now so while not entirely accurate you have to think that these valuations are somewhat reflective of the state of affairs in the NHL.

Here’s how the top 20 teams compare to one another: 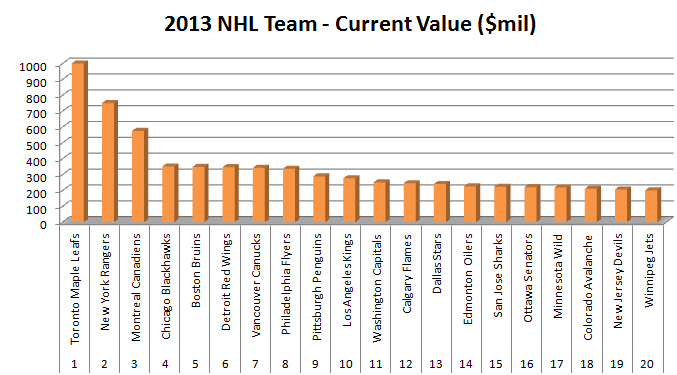 Here is the sad thing about the current state of affairs.  The NHL had record profits last year and the League has now locked out their player so that the owners can “level-set” the allocation of revenues.  The damage being done by the NHL lockout this time is bound to be more sever than it was in 2004-05.  In the 78 days since the lockout has been underway, the League has: