The BCHL today announced that the former Westside Warriors will now be known as the West Kelowna Warriors.  Warriors captain, Max French officially unveiled the new jersey and logo while, inside Royal LePage Place in West Kelowna, where arena workers were busy painting the new logo into centre ice. 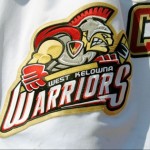 The Warriors have been in the BCHL since 2006 when the moved from Langley, BC.  The Langley franchise had joined the league in 1994 as the Langley Thunder before re-branding as the Hornets in 1998. The West Kelowna Warriors have never finished higher than 3rd place in the BCHL.

The BCHL currently consists of 16 teams in two conferences, the Coastal Conference and the Interior Conference.

The Penticton Vees are the defending BCHL champions after setting a number of records during the 2011-2012 season including: